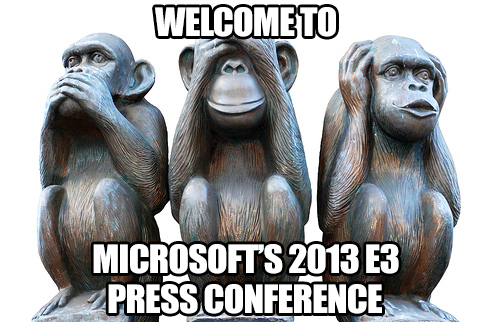 Oh Microsoft! Sometimes I just don’t get you.

You schedule a console reveal event prior to E3, which in and of itself is completely fine, but then you pretty much ignore your gaming core, focusing instead on TV and movie integration, show off your recently purchased Skype tools, and push the Kinect technology without clarifying exactly how you will ensure privacy with your always-on camera. Sure, you flashed us some EA titles and trotted out poor old Halo yet again, but as a TV series with Spielberg attached.

At this point, I’m telling myself that while the reveal did absolutely nothing for me. That I would wait to see what E3 brought to the table.

Then you announce you are cancelling the Q&A session post-E3 presser. A bad move considering rumours  that you are having issues with production and still haven’t clarified your used games/privacy policy/”always-on” internet requirement positions with game journalists and news outlets. What’s worse is you say you’ve canceled it due to conflicts with one on ones with important partners.

Sure, I’m speculating but I’m 99% sure that those “important partners” are Hollywood and TV executives. So you freed up a bunch of time to schmooze with them, wine and dine them into getting into bed with you. So your next move, canceling scheduled one on ones with game journalists and not offering to reschedule those just makes it seem more and more like you need more time with the Big Money Guys. So and so from XXX Pictures or YYY Media Group has an opening to talk to you and the GiantBombs, GI.biz, et ceteras of the world just can’t compete with the chance to sign another $4 billion dollar licensing deal.

Maybe you should use some of that $4 billion to educate your execs on how the cloud works.

As an early adopter of the Xbox brand, I feel as though my years of investment in the brand have been all for naught. Microsoft and its Xbox division seems way too focused on competing with Apple than actually catering to their core. Sure, everyone loves to expand their user base but at the expense of what you’ve already built? Sounds like a bad business model, especially when you have solid competitors with the PC and Playstation markets.

You still have an opportunity to turn it around. Monday is a few days away, and so long as you bring more to the table and show me real value (as in 1st party non-Kinect/motion games), and more than the same old same old Forza, Halo, COD exclusive DLC, yadda yadda blah blah blah, there is a chance you’ll end up in my home. Just most likely months after a PS4. And if not, it’s your loss, not mine.

And for the record, your antics this week still have you ranked higher than that Forbes contributor piece on what women should wear to E3.

Update: So 45 minutes after I posted this, Major Nelson posted this blog with official Xbox One links regarding Kinect, used games and internet connectivity. I feel a bit better but they won’t sell me on a system until I see the games.