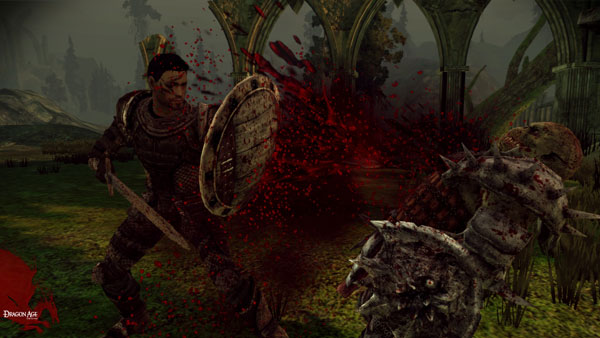 Dragon Age wasn’t on my watch-list when it was announced. Probably because I didn’t end up enjoying Mass Effect as much as I was hoping to which turned into lukewarm feelings for BioWare. It wasn’t that I thought Mass Effect was a bad game, more that I just didn’t find myself feeling as submersed into the universe as I thought I would. But months later my newly minted husband decided he wanted to pick it up after hearing good things from friends. I still wasn’t really feeling the Dragon Age mojo, so I watched him a bit as he played figuring I might one day get around to it.

A while after he finished up the Awakening DLC I decided to take the game for a spin in my 360. My desire to play an RPG that would wash the bad taste of Final Fantasy XIII from my mouth was overwhelming. After getting used to a new control scheme (something different than the JRPGs and Elder Scrolls titles), I had to admit I was impressed, running through multiple characters over the span of a couple of weeks.

My initial impressions while still early on in my quest to save the world were those of contentment. I found that I kept comparing everything to Oblivion, when really I shouldn’t have. Yes, both are Western RPGs and some comparisons are valid, but I wasn’t looking at Dragon Age as it’s own game. Once I stopped thinking of my Elder Scrolls obsession, I began to appreciate Dragon Age for what it is.

Probably my favourite feature with Dragon Age was having multiple character stories available to you. Depending on which race you select as your character’s background, there were so many small differences in the overall story which made each play through unique. I tend to stick with the human race when I play games, but since there was an achievement for seeing each of the story intros, I made quick characters so I could witness those and see how those choices varied the game.

Being able to have relationships with my companions and in brothels was also entertaining. With my first character I did a little bit of experimentation. I tried to woo Alistair, but after a rocky start I just couldn’t smooth talk him into my tent. But Leliana was all over me. It was my own fault for being nice to her. Soon enough I had her giving me the eye so I did what any sane person would do and took her to bed. Then I picked up the debonair Zevran and dropped Leliana for him. I know, I was just horrible in that first game. That first one was also when I goofed around in the brothel. The small scenes leading into the sudden black where just so cheesy that I couldn’t help but laugh every time. Second character was male and I used him long enough to get Morrigan to sleep with me, then I abandoned him for another female character to get along with Alistair so he’d fall madly in love with me.

As a fan of the fantasy genre, storyline is very important to me. I’ve read epic fantasy, modern fantasy, and historical fantasy. If you want to keep my attention for more than 20 hours, you had better bring a solid tale to the table for me. Dragon Age definitely took me to a world I wanted to explore and evoked emotions I was hoping would get some exercise. From the minute I found myself joining the Gray Wardens until the last battle, I experienced a fluid adventure with seamlessly integrated side-quests. When you can pull that off, your writing department deserves a few shiny gold stars.

Dragon Age Origins may not have been as long a game as I am used to with the Elder Scrolls/Fallouts/Final Fantasies of the gaming world, but in the time that it would take me to discover everything in those games I was able to enjoy three variations of the story. Being able to experience so much and seeing just how well written a tale is that it can be slightly altered and keep bringing you back to the universe at hand is what really puts this game in it’s own sub-category in the RPG genre – the BioWare sub-category. They have proven time and again they are truly masters at weaving “Choose Your Own Adventure”-esque fantasy/sci-fi tales. This is why, despite the demo for Dragon Age 2, I will be devouring this sequel as soon as I can pry it from my husband’s Xbox 360.

And like any game there were the downsides to Dragon Age. Like the multitudes of game freezing issues when there were a large amount of enemies on screen or just when I would load the final battle area. That had to be the most annoying of them all. No, the game freezing as a slayed the last boss is definitely the biggest kick in the groin I experienced. Thankfully none of these issues caused my save file to corrupt (ahem, Fable 3, yes I am still bitter towards you right now). Some areas were blocked off from me during my later games which had never happened previously, but since I no longer needed the achievements attached to them I soldiered on.

The added content from the Awakenings DLC was a pleasure to play (and helped bump up my gamerscore). I only used one of my female characters for that and did a single run-through. Eventually I’ll convince the husband to by the Ultimate Edition so I can clean up achievements from Leliana’s Song and the other small releases I just don’t have the MS points for.

For now, I’ve got to get back to the Dragon Age Legends app on Facebook and see what goodies I can unlock towards Dragon Age 2.