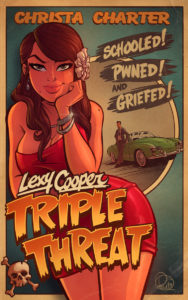 The mystery genre boasts a plethora of themes, from the traditional Agatha Christie to a growing number of cat inspired novels. Yes, cat mysteries, a subgenre I am not too sure I want to venture into. In a very tiny corner of this category you will find the Lexy Cooper series, inspired by author Christa Charter’s time in the video game industry and written after leaving her position as Trixie360 with Xbox.

Lexy stumbles into detective work when a body is found at the Xenon campus in Redmond. Her family friend, “Uncle” Mike Malick, is an actual detective who is called in to head up the investigation and relies on her for information about her fellow Xenon co-workers and some of the behind the scenes intel on the video game industry. It’s clear from the start that Lexy is infinitely more interested in her moonlighting job than the one that forces her to wear skimpy outfits and act like a fool for internet hits.

One of the main draws for me is the exaggerated for entertainment’s sake behind-the-scenes look at the video game industry and its disgusting underbelly: the treatment of women in the workplace, trading sexual favours for swag and/or advancement. In the most recent installment, Glitched, tackled events similar to the Penny Arcade Dickwolves fiasco.

But Lexy is not Nancy Drew; she’s a little crass, not above some lewd behaviour to get what she needs for her department, and has a thing with a married co-worker. She’s not perfect, and these flaws make her relatable. Hell, it still gets on my nerves that she was having an affair, because, as someone who has been cheated on, I have an extremely low tolerance for cheaters. When you can write a character that can incite these types of emotions in me, you’ve done your job wonderfully.

Lexy Cooper also has a great supporting cast: her family, her cameraman Trent and assistant TJ, her co-host “Agent 54” Henry Frasier, Malick’s team featuring officers Yi and Rogers, to name a few. Hell, there’s even a character named after me in Griefedas a thanks for backing Christa’s IndieGoGo for Book 3. So maybe I am a little biased in writing this….

If I had to compare the Lexy Cooper mysteries to something written by a mainstream author, I’d have to say Janet Evanovich’s Stephanie Plum books are the closest. There’s sex, drinking, piles of unwashed laundry, colourful characters – all the makings of a fantastic read that will end all too quickly.

To learn more about the Lexy Cooper series, you can visit the official website or check out reviews of Christa’s books, all of which are available digitally or in print form from Amazon.