I don’t fangirl over many things, however, while planning my first trip to Walt Disney World I discovered my favourite Iron Chef, Masaharu Morimoto, was opening a new restaurant to open in Disney Springs. And, miracle of miracles, Morimoto Asia was scheduled to be open during our trip!

You can bet I was stalking their Facebook and Twitter to find out when I could make reservations. The day finally came and I forced my husband to make the reservation the minute he walked in the door from work. In my defence, he was just as excited about this dining opportunity as I.

I didn’t eat that morning. There was no way I was about to risk being full as I had plans to sample a variety of dishes from the lunch menu. Anticipation and excitement forced my tired feet to move as quickly as possible through the Disney Springs Marketplace toward The Land and Morimoto Asia. We were on a mission, and not even the haberdashery could slow us down. 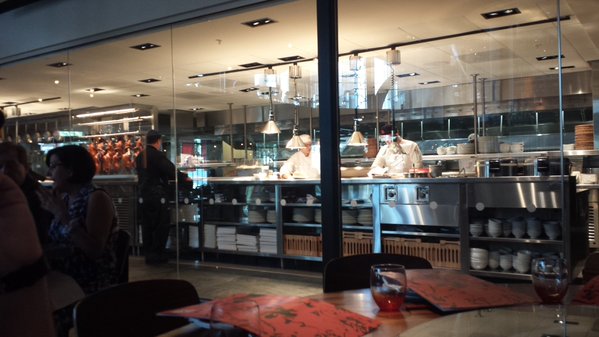 We were a party of six, so they sat us at one of the large round tables near the kitchens. Note the roast ducks hanging in the kitchen. If the others in our party enjoyed duck I would have loved to order one of them to share with the table. Observing the well-oiled hustle and bustle of the kitchen staff was wonderful. As though a perfectly constructed concerto played out before my eyes. There were no loud intrusive noises echoing into the dining area, and if there were children in the restaurant you wouldn’t have known it. I’m certain the calm coming from the kitchen spread to the guests, creating the perfect zen state in which to experience one’s meal. 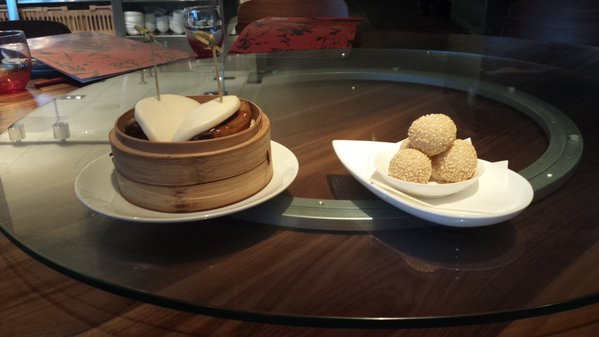 Sesame Balls are by far my favourite dim sum of all time. Second would be steamed bbq pork buns, the ones that are pinched shut at the top and filled with bright red cha siu. The sesame balls at Morimoto Asia are smaller than the large doughy ones you usually find at dim sum, but they were every bit as chewy with their perfectly smooth azuki bean paste centers. The crunch from the white sesame seeds coating the exterior popped between my teeth and added the right amount of nuttiness.

Next, I dug into the Kakuni pork buns. A thick slice of roast pork belly was tucked into the fold of the steamed bun with spicy aioli and lettuce. I’m not normally a fan of huge strips of fat remaining on my pork, but the gelatinous cap that remained on the pork belly melted on my tongue, adding to the juiciness of the bao. I would have ordered more if we hadn’t placed an order for… 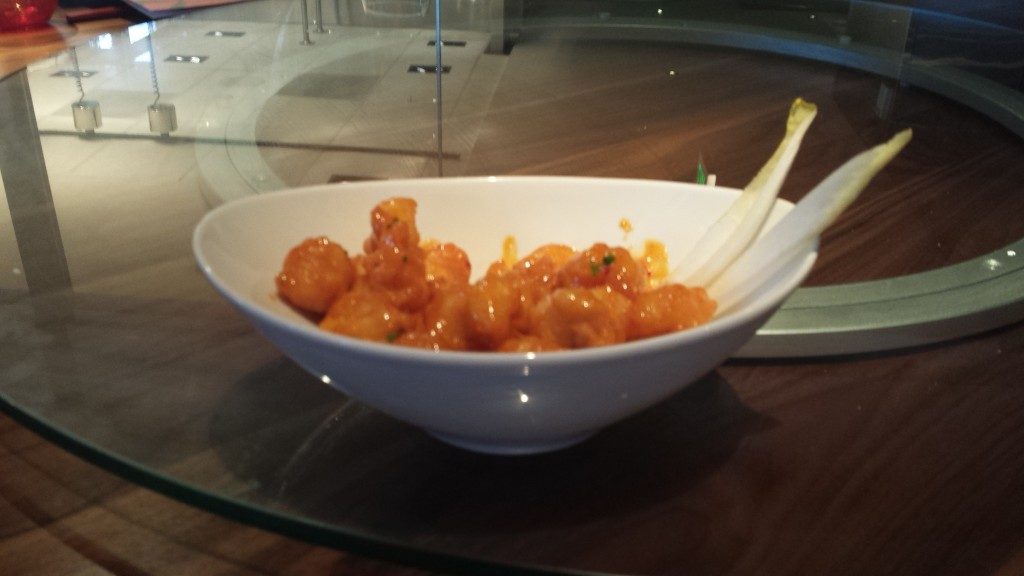 Let’s talk about these scrumptiously light and crunchy shrimp tempura coated in gochujang aioli. Tasty pillows of succulent shrimp, the tempura held its crispy texture under the sauce and even ten minutes after they arrived at our table had the same bite. I was worried the gochujang might be too spicy for my mother in law, but she ate them with ease. 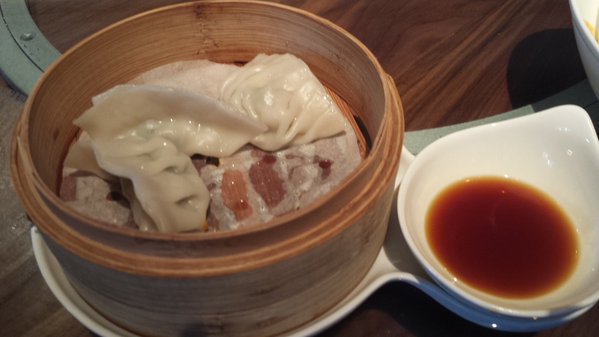 Of all the dishes we enjoyed at Morimoto Asia, I hate to admit that the chicken dumplings were rather disappointing. A simple filling of cabbage, scallions and ground chicken, they were lacking in flavour. I missed garlic and ginger, even that dash of white pepper that I find when I head to my favourite dim sum spots. Thankfully these weren’t ordered for me in particular, which meant I could move onto… 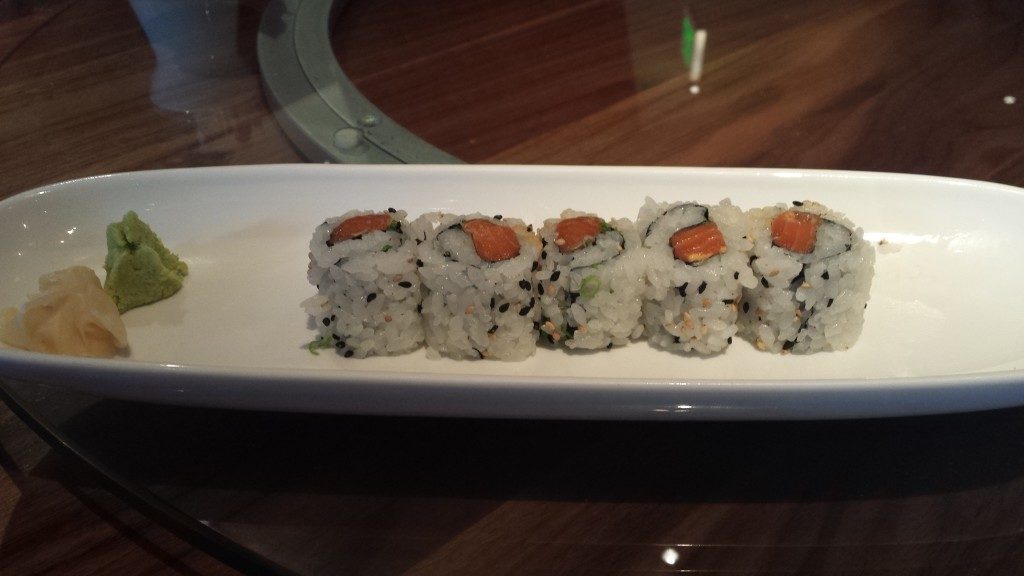 Morimoto Asia is considered a Pan-Asian restaurant, meaning Chef Morimoto has created dishes encompassing various parts of Asia. So while there may not be a very large sushi menu in the dining room (it is expanded for the sushi bar upstairs), there are eight varieties of rolls available to enjoy, available with either white or brown rice. The husband and I shared an order of spicy salmon rolls as the final appetizer to our entrees. I’m not positive, but I believe the spicy sauce in the roll was the same as the sauce in the pork bao. The salmon must have been at room temperature because it was warm in contrast to the cool sushi rice and aioli. I wanted more, and would have ordered another two rolls if I hadn’t planned on ramen before dessert.

Looking at those ducks for nearly two hours had me craving duck like mad, so that made my ramen decision for me. I ordered the duck ramen (above) and Matt went for his favourite spicy chashu ramen. When we sat down to dine I had to inquire about my mushroom allergy. Our waitress Miyuki was fantastic and floor manager Emer came by to find out what I was interested in eating to triple check my selections were mushroom-free. My biggest worry was with the ramen broth and I was extremely happy when he came back to tell me I could enjoy a bowl.

Fresh noodles were buried under the sliced duck, vegetables, and perfectly poached and seasoned egg, smothered in soy broth that had just the right amount of oil glistening off the top of the bowl.My stomach was telling me I needed to slow down now; it seemed the ramen noodles were plentiful and filling. Matt’s bowl was getting low, as well, and his nose had that slight sniffle you get from good spicy ramen. Our friends were almost finished with their sushi and pad thai (which they assured me was delicious), which meant it was time to order dessert.

I’ve known since the day Morimoto Asia posted their dessert menu that I would be ordering the Mochi-Mochi, which is a little deceptive since there is no mochi in the dessert. A creamy annindofu (tofu made from almond milk) topped with frozen mango, fruit boba, sliced grapes and a lemon yogurt powder, I poured the coconut mango “soup” over the top and DAYUM! I knew I was going to love that dessert, but I didn’t realize just how much until there was nothing left in the bowl. We also ordered the MM Parfait, a giant sundae of vanilla gelato, cream puffs, sesame crisps, and chocolate. We shared the two desserts between three adults, so I ate a couple bites of the parfait but the annindofu was my main focus. And I would make that choice again if its still on the menu when I go back again.

Accomplishing my goal of trying a little bit of everything was tough, especially when there are two dining menus and a sushi bar to discover. But that just means I need to return to Disney World soon, right? Look out, sushi bar, I’m gunning for you next.