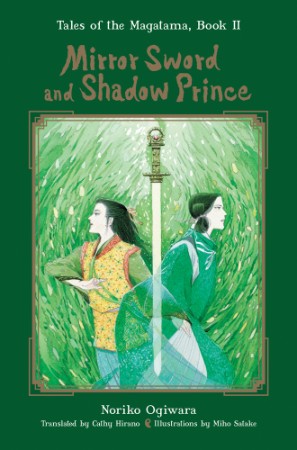 Mirror Sword and Shadow Prince is the story of two youngsters, raised as brother and sister, who find themselves on opposing sides of the emperor’s war. Set generations after Saya stilled the Dragon Sword, marrying the Prince of Light and creating a new line of emperors for Toyoashihara (Dragon Sword and Wind Child), Toko comes from the line of women sworn to the Shrine in Mino, while no one knows the real origins of her adopted brother Oguna.

Oguna and Toko have an incredible bond. She is the stronger one, speaking her mind and defending her adopted brother from the bullies; he looks out for her and is content with knowing the Tachibanas have given him a good home. He stays behind when the family visits the Shrine Maiden, as only her blood relatives are allowed to visit, and is interested in building and engineering. A quiet and obedient child, he silently wishes he could be stronger for Toko’s sake.

The opportunity arises when Prince Oh-usu arrives in Mino to bring Toko’s cousin, Lady Akaru, to the capital as the emperor’s newest wife. The Prince meets Oguna and discovers the young man looks exactly like him. Oguna is offered the chance to become Oh-usu’s “shadow”, to learn how to be the Prince and everything he knows to play the role of a decoy. Oguna accepts, and heads to the capital with Oh-usu and Lady Akaru (who have fallen for each other) to begin his training.

When Oh-usu launches an attack against his father, everything changes. During their escape to Mino, Oguna is captured, believed to be Oh-usu by the emperor’s men, and taken back to the capital. When the truth of his heritage is discovered, Oguna becomes the emperor’s Sword and is first sent to Mino to destroy Oh-usu.

Declaring revenge against her brother, Toko sets out to find the five magatama needed to create the powerful Misumaru of Rebirth and put an end to Oguna’s destruction. She must travel across Toyoashihara to seek out the other Tachibana clans who were given stones to protect and discover what her feelings for Oguna truly are.

The character development in Mirror Sword and Shadow Prince has greatly improved over the first book in the series, helping the story flow much more smoothly. They seem more lifelike and natural this time around, making you feel more of an attachment to them. Love, betrayal and self-discovery are quite clearly the backbone of the series, themes readers can always relate to. Once again, Noriko Ogiwara brings to life a vibrant world that draws you in until the very end and leaves you wanting more.

Purchase Mirror Sword and Shadow Prince from Amazon or RightStuf