Two things you can put in your game that will sucker me into buying it: animal characters and building elements. Which is why the instant I first saw Bear and Breakfast (which was either during the Wholesome Games or Day of the Devs 2022 stream) I knew it was a day one purchase. I played it every day for a week, finishing the game with 47 hours of play time under my belt. This made it a perfect candidate for my first new review here on my site.

Bear and Breakfast‘s hero is Hank, a young bear living in the Thicket with his mother and friends. After a particularly worrisome dream, Hank’s mother asks him to venture out of the Thicket to locate an item for her and bring it back immediately. Of course that’s exactly where things go off the rails. A mechanical talking shark suckers Hank into restoring an abandoned shack to bring people back to the area. And thus Hank starts a career destined for HGTV.

There are two core ways for Hank to improve the buildings: first by collecting materials to build rooms and basic furniture. Wood piles spawn in areas with lots of trees, whereas metal and fabric scraps spawn reliably at the junkyard in A24. The second way you spruce up rooms requires the purchase of assorted tchotchkes from Took. He’s a rascally scavenger who trades side tables, lamps, and other décor pieces for only the finest valuables (aka: guests’ trash).

Armed with basic building plans, it’s time to start putting together rooms and booking guests. Guests will have minimum requirements for comfort and decoration which aren’t super important in the beginning; you just want to bring them in and start making some coin. But as your coffers grow and purchase new plans, you’ll be able to eek out more cash. Building up new resort areas adds more things you must consider. Take for instance A24. It’s the second building you renovate, and guests visiting this motel are more often than not going to want a place to kick back with a cold one. This opens up the first Special Room, the Distillery. A simple bar, some stools, and a self-serve tap means happier patrons.

Running a B&B is already hard work. Running a handful all at once might be too much for one bear alone. You can recruit some of your new friends to lend a hand once you do them a favour or two. Gus can take care of reservations but he might not do a great job matching guests to rooms. That’s something I take care of myself. However, guests leave a lot of trash behind. My time is precious. I can’t visit each resort to clean up after them. Installing Wade’s cart in all locations means he keeps the place tidy. He’s the best darn rodent for the job and worth every coin spent. 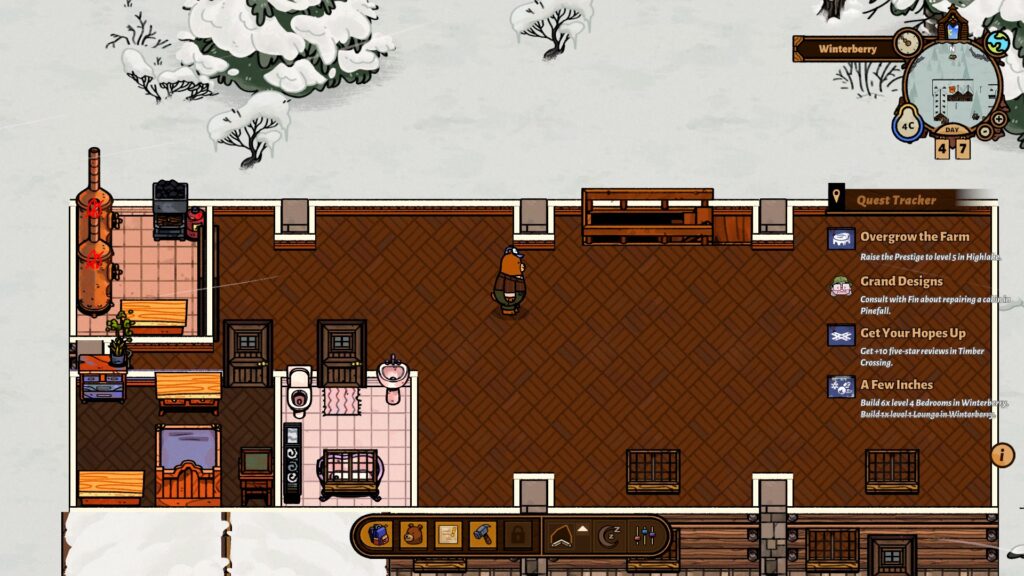 The storyline of Bear and Breakfast is primarily that of restoring the resorts. The Fin gives Hank quests, Hank completes them. But in-between, Hank will do favours for the locals like Oliver the bus driver, the mob rats at the junkyard, Sabine the ranger, and so forth. These quests dive into the heart of the matter. Discovering the truth about the Great Fire that drove the people away in the first place and searching for a way to bring balance back. It takes a while to really get into that side of the story, but when it does, boy it starts to get to you.

My biggest issue with quests in this game is that at launch the game only tracked quests you had picked up. If you were in a section of the map and a character had a new quest to give you, there was no guide to denote that was the case. You’d have to walk to the character to see if there was an exclamation mark over their head or not. It would have made a world of difference if the world map icons for characters made that distinction for you. Perhaps this is a feature Gummycat will add in the future? I can only hope for the sake of new players.

I did experience some weirdness with Bear and Breakfast. Even after the first patch, some guests were floating torsos (sometimes “sleeping” in hallways), stuck at the bus stop, unable to walk into bathrooms or the campsite. My chef wasn’t restocking the buffet tables in the dining room on a regular basis. Restarting the game wasn’t a sure fix; sometimes it worked, others not so much. Not to mention the lack of credit roll at the end of the game left me wondering if I was finished or needed to go hunt down another quest.

Bear and Breakfast doesn’t offer much in the way of replay value. It’s a one and done experience. You’ll easily unlock every Steam achievement without having to try too hard. And considering the $20 price tag gave me a solid week of entertainment, worth every darn penny spent. Here’s hoping the team can smooth things out soon because this is a great game if you are into building sim adventures.

Bear and Breakfast is available now on Steam/PC (Steam Deck “playable”) and is coming in 2022 to the Nintendo Switch. For more information about the game, you can visit the official website.