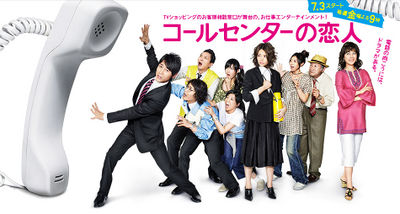 The world of TV shopping has exploded since the world-wide recession. More and more people are looking for deals on the every day products they use, and sometimes products don’t always work as advertised. When Tokura (Koizumi Kotaro) makes the mistake of mocking the shopping channel’s #1 hostess (Aisu, as in Antarctic Ice, due to her cold heart), he finds himself sent to the call center. Out here in the middle of nowhere are the people who man the phone lines for ordering and customer complaints. However, this group of specialists does more than just listen to complaints, they go out of their way to make sure the customer is completely satisfied. Even if that means upsetting the main office in Tokyo doing so. Each episode had one product that is focused on, whether it be a flashlight, video camera, workout DVD or discounted food, as well as a customer connected to it that seems to be uniquely tied to the item.

In the beginning, Tokura gets along with no one. He is hellbent on getting back into favour and returning to the main office. Over time and as he takes part in the adventures the customer complaints division seems to inevitably get into, he comes to find that he does indeed enjoy his work.

One of his coworkers, Aoyama Kyoko, is most dedicated to her work. She has also had a run-in with the shopping channel’s queen and has been focused on customer satisfaction. She barely sleeps at her apartment, choosing to work several night shifts on call, sleeping on the office couch. Every product featured on the channel she tests out and carefully reads over the manuals. Finding out what exactly happened between her and Aisu is a side-hobby of Tokura’s throughout the show.

Will Tokura ever go back to the main office? Will he discover the reason for the animosity between Aoyama and Aisu? Watch and find out!