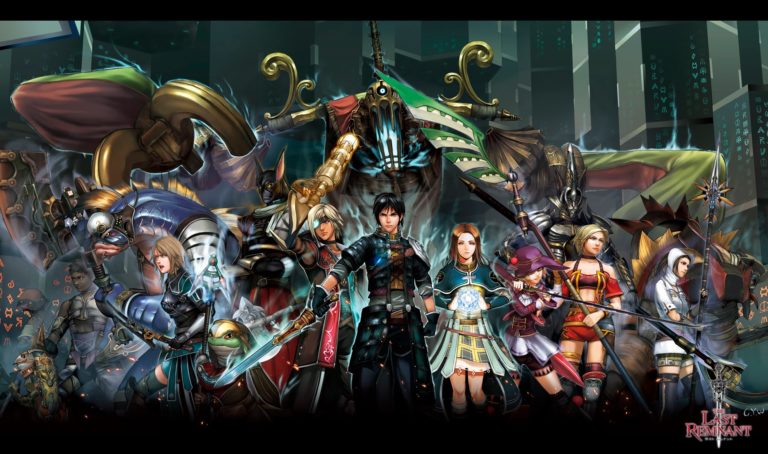 Status: Started but did not finish Last Remnant
Achievements: 7 of 22
Gamerscore: 130/1000
DLC Purchased: None

In my quest to play through games sitting on my shelves, I dug out Last Remnant, a title picked up during the last holiday season. Drawn to it mostly due to the fact that it was a Square Enix made Japanese RPG for the 360, a genre which I adore, I am glad to say I was not disappointed.

The story begins when our hero Rush Sykes watches as his sister Irina is abducted right before his very eyes. Their parents are the top researchers on Remnants and their powers, which leads one quickly to the conclusion that Irina must have some special ability to bond with Remnants, powerful objects that can be bound to a user until it has consumed his or her last breath.

Rush is determined to get his sister back, and finds himself assisting the young Lord David of Athlum in exchange for information and help in retrieving Irina. The plot thickens as the two young men discover that there is corruption in the Academy and the government, keeping their actions as low key as possible, so as not to arouse suspicions. With the aid of David’s generals, Rush starts to learn more about himself and the unique abilities of his family, and the true reason as to why it was Irina taken and not him.

Last Remnant’s story does drive the game, however side quests are extremely important. Not only do they provide you with great opportunity for finding items and upgrading your characters, but they make up over 50 percent of the gameplay. While it is not necessary to complete all side quests, doing so unlocks achievements and special events towards the end of the adventure. Side quests can mostly be found in the local pubs, but some are scattered throughout the streets and castles you will journey to.

There are tonnes of dungeons for you to fight your way through, either while completing quests or just so that you can collect items and level up your characters. Searching these areas will provide you with access to new cities, rare items and the chance to see how high you can string together a battle chain. (Making it past the 200 chain mark provides you with an achievement!)

Last Remnant’s battle unions are unique and might take you some time to get used to. Depending on your place in the game, you will be able to create a certain amount of battle unions. Each union requires at least one Leader and can have up to four other characters as a part of the formation. HP and AP are shared throughout battle, meaning when the group’s HP is down, that union is out of the engagement, unless otherwise revived by another union. AP is used to perform Combat or Mystic Arts maneuvers. At the beginning of each round, you will select one of the available moves for the union to make. While the union engages the enemy in battle, you may see a Trigger Chance pop up on the screen. Trigger Chance gives you a short period of time in which to push the correct button (A,B,X,Y or RT). If you hit the button on time, it will increase the chance of hitting and giving heavier damage. Stringing these together by continuous perfect hits will keep increasing the damage counter.

As your Battle Rank increases and you use your Combat and Mystic Arts, you will unlock new or stronger versions of them. I am very combat heavy with Rush, so my Combat skills and some restoration skills increased faster than my Mystic abilities. I suggest trying to keep Rush well rounded and allowing David and his generals to focus on their main abilities, but encouraging some other skill development as well.

Recruiting leaders from the local guild halls and soldiers from Athlum allows you to create more battle unions. Guild leaders will cost you some money, but soldiers will not, as they are offered by Lord David. Some leaders have special weapons and abilities that will be of great assistance in battle, and are also good to have on hand at times when David’s party is not accessible.

Also at the guild halls you can check on your Guild Quest status and claim any rewards for completed quests. There are no particular things you have to do to activate these quests. Playing through the game, defeating enemies and locating items is mostly what you need to accomplish. For instance, one quest requires that you defeat a certain amount of spiders in Blackdale. Another says you need to find a certain amount of steel ore. As soon as the requirements are filled, you may visit the guild hall and claim your prize.

Weapons can be upgraded with a combination of items found in dungeons and money when you visit cities. You can also purchase new accessories and herbs for Rush to carry. You really only focus on Rush’s needs as David, his generals, and any guild leaders and soldiers you recruit will request items at the end of battle that they are looking for to upgrade their own items.

Aside from the amazing CG graphics and the very vibrant character designs, my favourite feature of the game is that I can play it in either English or Japanese with subtitles. The English voice over is one of the better ones I have heard in recent times, but I keep switching between the two languages.

If you are looking for a game to pick up easy achievements for gamerscore, this is not the game for you. Two of the largest achievements, worth 200GS a piece, can only be achieved by completing certain requirements. Hardcore RPG fans will enjoy the game and completionists even more so. Achievements are not easily come by as it is, and will require several hours of gameplay to unlock even some of the more basic ones.