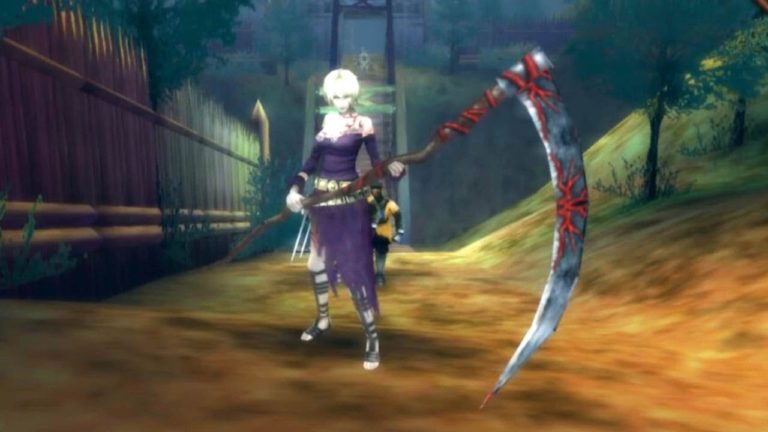 Disclaimer: This review of Undead Knights is based on the review build that was sent out. The final version of the game may have some slight differences and tweaking of gameplay.

I haven’t played a good hack and slash game in a very long time. So when you tell me about a game that incorporates zombies into it…. well, I’m sold! Tecmo Games has done just that, with a great new game for the PSP – Undead Knights.

The story is a simple one: the King, influenced by his hot and busty young new wife, has decided that the House of Blood (a family who has long serviced the throne) should be wiped out. Little did the King know that his daughter had just married into the family, and the House Leader Romulus, the princess Sylvia and her new husband Remus were slaughtered on their way to share the joyous news with her father. The House of Blood has powerful blood pumping through its veins, and so in death, the three are reborn, commanding forces of the living dead as they systematically destroy those who were behind their murders.

Let’s begin with choosing which character is right for you!

Romulus: The most balanced of the three, Romulus wields a decent blade and has decent recovery time between hits. He is good for the beginner player.

Remus: Speed makes up for his weaker rapier attacks.

Sylvia: Her scythe attacks do heavy damage, but her slow movements leave her vulnerable to attacks.

Characters are chosen at the start of each chapter, so if you find one isn’t working out for you in a particular chapter, you can always chose another when you restart. You will also choose your difficulty level for each chapter, thus allowing yourself to face tougher challenges.

There are 20 chapters in Undead Knights, providing you with tons of zombie minions to clear the way for you. Turning zombies is relatively easy. Hold the Circle button to perform a choke hold on the enemy. As you progress through the game, you will find that some enemies need to be grabbed twice as they become stronger than earlier levels. Another way to turn zombies is by activating a powerful Wrath move that will instantly kill and turn any enemies caught in its wake. Sometimes you need to stun the soldier before you can grab him. Using the Triangle and Square buttons you can attack your enemies and weaken them.

There are several things you can do with your newly turned minions. They can climb on top of each other to build bridges, take down structures for you, and you can throw them at larger enemies to stun and distract them. The most important command you want to give them is to attack the enemies. By stringing together attacks you will increase the amount of White Souls you earn at the end of the chapter.

On the topic of souls, green ones will replenish some health, and red souls will help fill your Wrath bar quicker. Red souls are generally found in giant chests hidden in each level, while green souls comes from destructible vases and other such items.

At the end of each chapter you will be ranked on Souls Earned and Clear Time. The combination of the two ranks will then give you an overall rank and determine the amount of Dark Energy you have earned for customization. Upgrading your character is key in this game. By doing so you will be able to increase your strength and the destructive power of your weapons. Keep in mind that Dark Energy is shared between all three characters, so upgrade accordingly.

As you progress through the game you will also notice that you unlock Revenge Titles at the end of chapters. You can check which Titles you have gained in the Records of Revenge. You can also see your chapter records from this section as well.

Ad-hoc mode will let you hook up with friends for various multiplayer matches. Survival Race, King Battle and Undead Battle. Unfortunately I was not able to try out these mode for the review, but I bet they are a blast.

Fans of metal music will love the soundtrack to the game. There are three metal groups who have music featured in the game: Lightning Swords of Death, Endless Blizzard, and Valdur.

Overall Opinion: As far as hack & slash games go, this one ranks right up there for me. I normally don’t enjoy these titles too much, or at least I haven’t since the original Devil May Cry. (The sequels just weren’t fun for me at all.) It also was another reason to charge up my PSP and use the thing again. There isn’t a whole lot of dialogue in the game, but for what there is, the voice acting was just the right amount of cheesiness. If this was ever to get the movie makeover, it would have to have Bruce Campbell star in it.

I really enjoyed the game, although I did run into a couple instances that I am 100% sure will be fixed for the retail release. You can just pick it up and play a couple levels at a time then come back to it later on or play it through in a sitting. Sylvia was my Anti-Hero of choice, and I loved every minute I spent swinging that enormous scythe around the screen. And while not a big metal fan, I did find that the soundtrack was extremely fitting for the game. I am so glad that I was able to enjoy this title earlier than I originally expected to.