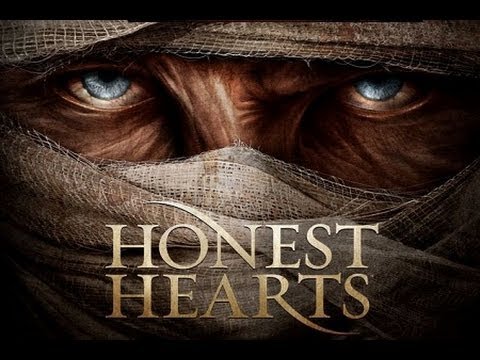 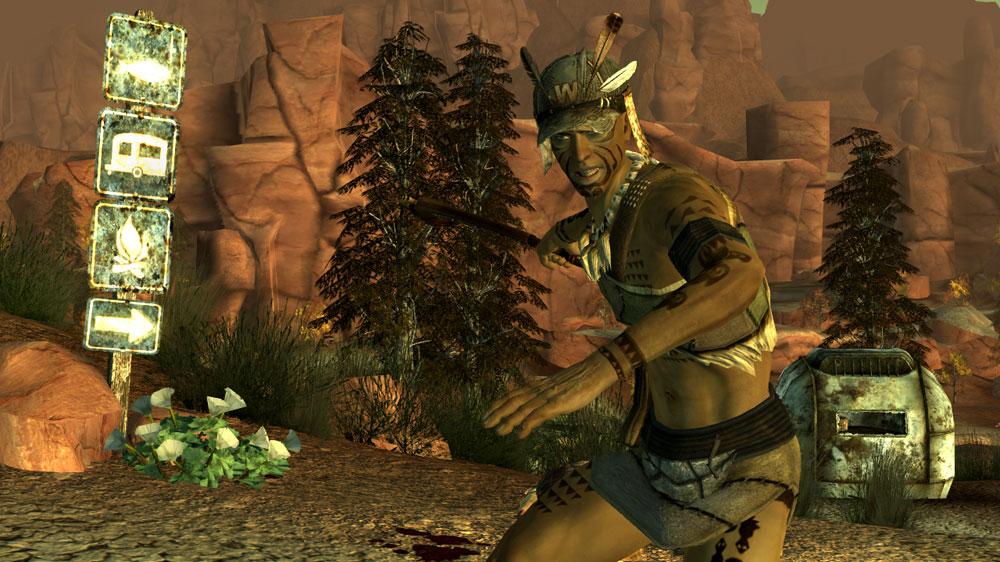 After previous experiences with Fallout 3’s add on content suffering major release issues, I decided that I’d wait a while before picking up new quests for New Vegas. I didn’t want to be burned again with purchasing content on release day and being unable to play it. So when Bethesda had a recent Xbox Live sale, I picked up Honest Hearts and Dead Money. I polled my friends, and heeding their advice, chose to venture into Zion and deal with the White Legs in Honest Hearts.

As with most Fallout DLC, Honest Hearts starts off with a radio transmission. A trading company is looking to hire some help making a trip into Zion to do some trading and check on the inhabitants. They haven’t heard from anyone in a while and want to make sure they aren’t walking into a trap. As soon as you arrive, your companions are slaughtered when a band of renegade Natives called the White Legs ambushes you. You’ll survive, and thanks to the help of another Native, Follows-Chalk, you are soon brought to safety and meet the infamous Burned Man. (To catch you up, Joshua Graham the Burned Man was once Caesar’s right hand man, until he betrayed the leader and was set on fire as punishment.)

Joshua explains that the New Canaanites were killed by the White Legs, who are trying to prove loyalty to Caesar and join his fold. Those who survived fled to Zion, where Joshua now leads the Dead Horse tribe, teaching them how to use modern artillery to defend themselves. Another retired warrior named Daniel leads a second tribe, the Sorrows, who are friendly to the Dead Horses but not as aggressive in their ways. Joshua wants you to help him defend Zion Canyon so that both tribes can stay here in peace; Daniel refuses to make the Sorrows become a war-like people and hopes you will assist him in aiding their flight.

Zion Canyon is full of old camping sites, ranger stations and other buildings the Native people have marked as taboo. Anything deemed taboo has been marked and should be checked out. Follows-Chalk, your Dead Horse companion, loves checking out these off-limits places, and comes with an added map making perk; travel with him to high locations and he will scout out nearby destinations and have them marked on your map. I recommend traveling with him all over the place in the beginning so he can help you find all of the hidden locations you won’t find on your own if you stick to the story. You’ll also have access to a companion from the Sorrows tribe acquired through the quest about halfway through.

Ammunition and weapons are pretty limited in Zion, which means you need to choose wisely what items you will bring with you on the journey. You need to make sure you have room in your pack as it is to make the initial leg of the trip with the traders, leaving you to scavenge and loot your way through the canyon. Fortunately, you’ll find reloading tables hidden in caves along with some caches of supplies left behind by someone who chronicled their remaining days after the initial nuclear attack. And if you’re really in a pinch, Joshua has guns and ammo for trade, while Daniel sticks with healing supplies.

If you want to clean up all five achievements with one go, it’s important to note that you will know when it’s time to make that decision. You’ll be able to get the first three just fine following the story, so just before you decide who’s plan to go along with, save your game! You can always reload from this point and choose option number two. Regardless of how you leave Zion, the area does not become shut off and you can come back later on should you want to do so.

Honest Hearts added a good six hours of story, adventuring and scavenging to my Fallout New Vegas experience. It was a nice little side story to bring myself back into the Fallout universe with, seeing as I hadn’t played the game in months. Thankfully, I ran into no major issues (super pixel glitches, freezing, hiccups with text) which either means a better job was done making sure the DLC worked properly as of Day One or there had been an update between release and when I purchased it. Finally, a near flawless expansion in the Fallout universe that I was able to enjoy start to finish.