Professor Layton and the Last Specter (or Specter’s Flute, depending on your region) it the first in a trilogy of prequels to the best selling puzzle series. Layton receives a letter from his old friend Clark Triton, requesting his help in the town of Misthallery. A mysterious specter comes out at night, destroying homes in various parts of town, and putting the lives of many innocent people in jeopardy. Layton barely has time to meet his new assistant, Emmy, when the two rush off to Misthallery and solve the puzzle that awaits them.

When Professor Layton reaches his friend’s home, he finds Clark shocked to see him. His friend swears he did not send the letter asking for aid. It is after this exchange that the Professor makes an effort to introduce himself to Clark’s son, Luke. Luke is amazed to meet his father’s dearest friend and asks that he join Layton and Emmy on their quest to find out what is really going on in town.

In true Professor Layton fashion, Last Specter once again offers an intriguing whodunit littered with mind-stretching puzzles around every corner. You never have to go too far to find a resident willing to share a brainteaser. Many of the puzzles you’ll encounter will seem familiar to those solved in the past. They are definitely different puzzles, just very familiar in format: sliding puzzles, math, elimination, etc. If you miss a puzzle here and there, don’t fret! Those unfinished puzzles will head over to Granny Riddleton’s shack or you can keep an eye out for her cat, Keats, around town. He’s minding the shack while Granny heads off on vacation as it is.  Hint coins are all over the place, hiding in windows and bushes to help out when you are positively stumped. Also returning is the Super Hint option first available in Unwound Future.

Once more, there are collectibles and mini-games to acquire during the course of your time in Misthallery. Twenty four odds and ends are hidden in this country town, waiting for you to find them. (Hint: there is one under a table in the cafe.) Tapping certain areas repeatedly with the stylus and clearing the dust will help you find them. As for mini-games, Last Specter contains three. The first are the Toy Traincourses. Each course has a different layout, and you must form a track that helps the train (or trains) get from start to finish while visiting every station on the map. Next is the Fish Tank game. In this game, you must help the fish eat all of the coins by using air bubbles to redirect their course. The final game, the Puppet Theatre, requires you to “direct” three different plays and insert the correct action word into the script. All courses and action words are gained by correctly solving certain puzzles throughout the main game. 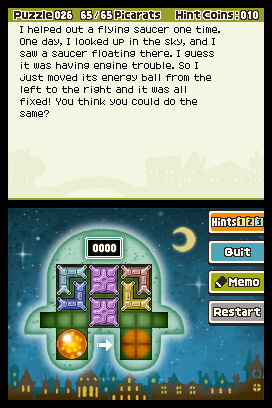 Separate from the main game but included on the game card is yet a fourth mini-game. London Life is accessed via the main select screen, and here you will create a Layton-esque avatar which you will use to help out your neighbours (all familiar faces from the series). Each day, new quests will open up for you to complete; solving crimes, finding lost items, and taking part time jobs to earn more Wealth, as examples. Doing good deeds for your neighbours will also increase your Happiness. The higher (and maxed out) your Happiness, the more Wealth you will collect. Your Wealth can be spent on clothing, items needed for quests and decorating your bedroom. Red quests have the shortest time frame for completion, yellow ones second, and the green ones are more forgiving for time.

Level-5 has always done amazingly well with the cut scenes and audio work in the Professor Layton series, keeping me in awe of their ability to get the most out of the DS card. As before, I am impressed with the quality of the voice overs, as those British accents are the only voices I can associate with Layton and Luke that ring true to my ears. And as much as I wasn’t too keen on Emmy’s character (she seemed a little too cheery and possessive of Layton for me), her voice did fit her character well. Extremely happy with what Level-5 has put together, as I expected I would.

My addiction to the Professor Layton series is a well-established fact. As I sit here writing this review with my Layton Revoltech figure on my desk and my DS on a table to my left (which still has the game inside as I intend to finish the last half dozen puzzles I missed), I am already anxious for the next game to be released outside of Japan. So anxious that I plan on watching the Eternal Diva movie at least once a month until that time comes. If you had told me years ago that I would be this in love with a puzzle game, I would have scoffed and told you you were dead wrong. I have Cathy, my old Nintendo rep, to thank for getting me hooked on the series.

I had a great time witnessing the first interactions of Layton and his new apprentice, Luke. And as much as I am not overly fond of Emmy, I want to see how her story with Layton plays out. The London Life mini-game is also entertaining, and after only a couple of hours, I’ve played about 10 “days” in the game.

I suppose the only negative thing I have to say about Last Specter is that the spine of the case does not match the others, making it look dull alongside the other installments on my DS shelf.

Purchase Professor Layton and the Last Specter on Amazon