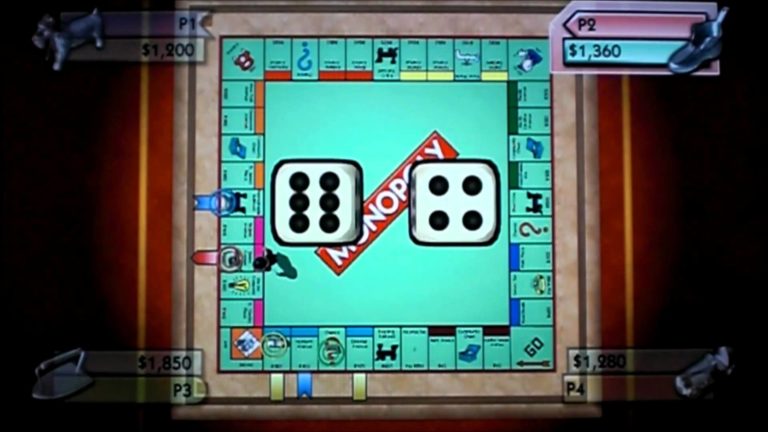 One of the most revered of all board games, Monopoly is one of the first EA Hasbro titles to hit consoles just in time for the holiday season. Instead of dragging out three different boards, trying to find all the money and player tokens, you can pop a copy into any of the current generation platforms and select from multiple themed boards without having to worry about who is going to be cleaning up once the game is over.

Let’s start out with the Classic mode we are most familiar with. In this mode, you and up to three friends (or computer AI) can select from the original board, the new World Board from Here & Now Edition, a future board, food themed boards and others. The properties, utilities and railroads are all renamed according to the board on which you are playing. For example, on the Cheese board you are using wine and cheese themed tokens and your properties are all named after cheeses. The 1st player is given a Passport to fill during game play. You fill your Passport by landing on property, forming Monopolies, building, trading, all the usual sorts of things one does during a game. Once you meet the required number of stamps for your Passport, you are given a new board to use and a brand new Passport to fill. On your first play-through, Pennybags will talk to you and remind you of the rules of the game. He also is there to provide commentary throughout the game.

The second mode in Monopoly is Richest mode. This version of game play is based on how good you are at winning mini-games. There are three levels: Developer, Industrialist, Tycoon. Each of these levels has a different amount of rounds that you must play through. You start by selecting any of your unlocked boards & picking your tokens. When Richest begins the game automatically rolls four dice. These dice are then fought for by competing in a mini-game. Whoever places first has first pick of a single die, second picks from the remaining dice, etc. At the beginning of the game you want to pick the higher numbered dice as this will give you more locations for your token to land on and better chances of gaining more property. Later rounds you will want to select the lowest numbers in order to avoid landing on too many spaces owned by other players.

The rounds continue in the same manner, however other players tokens may land on some of your properties and this is where the game becomes interesting. When they land on your spaces they will have to give up some of their land to you as rent payment. When you own a Monopoly they will give you two, a set of houses is three, and hotels are four properties. Houses and hotels are gained by landing on one of your own properties in the Monopoly set. Chance, Community Chest, Go, Just Visiting, Go to Jail and Free Parking also come with their own rules that will either favor the player who landed on them or the poorest player on the board. Your net value is determined by how much property you own. The winner of Richest is the player who finishes the last round with the most property.

Overall I am really enjoying the digital version of Monopoly. Sadly, there are a few grievances that I have with the game. Having Uncle Pennybags talk you through each mode the first time around is great, but even then his constant commentary as you land on each square grates on your nerves. There is no option to turn him off or skip, so you are forced to have to wait until he’s finished yapping to continue. Another thing that just seems ridiculous is how completely lucky the AI can be sometimes. Well, let me rephrase that: most of the time. The further you are into the game, when its down to yourself and one of the AI players, no matter how much property you own, the AI always seems to miss it. You can own two entire adjacent sides of the board, and the AI will land on Chance/Community Chest or the random corner square nine times out of ten. Extremely frustrating when you are trying to bankrupt that last player into giving you all his property and getting a Monopoly win.

My biggest disappointment is with the complete lack of online support. Monopoly would be a great game to just sit down and play over XBL or the PSN using the cameras, yet this option is nowhere to be found. If games such as poker and UNO can support the cameras and offer such a great casual gaming experience on the console, then Monopoly should be able to as well. I am personally hoping that EA considers making patches which will allow these functions soon.

All that being said, Monopoly is a classic game and even with the annoyances that I have with the game, I find myself playing it over and over again. It’s a great family game and easy enough for even the newest console gamer to pick up without feeling overwhelmed.