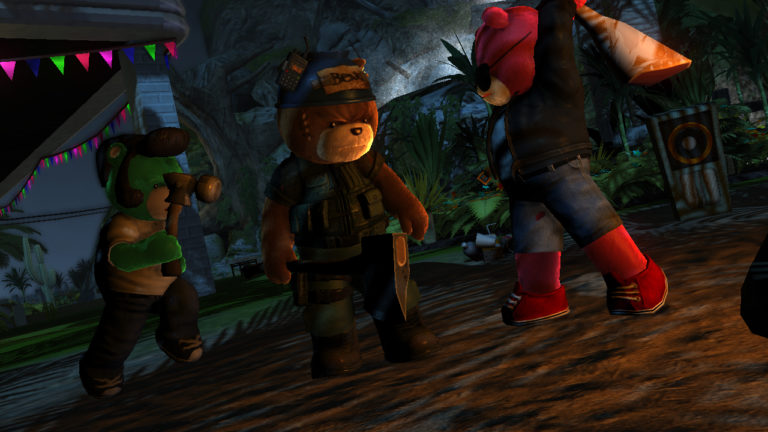 The concept was alluring – an M rated game starring an evil and malicious stuffed animal hell-bent on revenge and destruction. Everything seen in previews and trailers looked promising. It was one of the few summer releases that actually was on my “To Buy” list. Unfortunately, once Naughty Bear made its way into my Xbox 360 nothing but disappointment followed.

The repetitive nature of the game coupled with a map that never seems to change is just the first of many complaints I have with Naughty Bear. While the game offers seven chapters with additional challenges, the map is exactly the same each time with very minimal changes to the goals for each challenge. They always have one particular Bear that you need to reach and punish and the optional destruction of X amount of item (insert gift, bird, rosette, etc here). Some challenges require stealth, or simply to not be injured, and that’s all fine and good. Games should be both fun and challenging. However, when you are on your twelfth attempt to clear a challenge asking you to not be seen and out of nowhere five enemies all seem to see you trying to cross the bridge to the next section of the map, you just want to throw your hands up in the air and walk away.

Clearing these challenges is imperative to your advancement in the game. The trophies gained from completing a level helps to unlock additional challenges and main story levels, as well as costumes to increase various stats for Naughty. It’s too bad that playing through them begins to feel like a chore. I would much rather scrub a toilet in a public bathroom than attempt one more run-through on an Indestructible mode challenge.

Earning points isn’t all that difficult. You can really add to the multiplier meter by sabotaging items and laying a trap right in front of it, then hiding in the forest until some poor sucker gets caught and scaring the stuffing out of him. Then let him limp around the disco for a while before slamming his head into the fire-pit and watching him burn to a smoldering pile of nothingness. But when you get to the challenges that require you to stay out of sight, you have to rely on sabotage and traps to buffer up some points, which is extremely boring and seems to take forever. Over time the de-fluffication moves become stale and you would rather just stab the opposition to death than set up the more elaborate kills and scares.

Naughty Bear also has a multiplayer game mode, but I was not able to experience it. All of my attempts to join matches failed. More often than not I would find myself all alone in the lobby, waiting patiently for someone to arrive. And when someone did show up, they disappeared almost as fast as the arrived. If there had been people available to play with, the multiplayer may have been entertaining, especially with friends.

My other major issue with Naughty Bear was with the sheer amount of glitches that I encountered. The very first level I played my game froze right as I was walking through the gate back to Naughty’s house to end the episode. Frustrating, but I can forgive it the first time. Second glitch I run into, literally, was getting stuck in a tree in the forest surrounding the Disco. Another disappointment as I was just about to progress to the last area of the map. There was also poor collision detection with the doors of the buildings. Often times bears would be standing in the doorway and the doors would close on them, but the bear would be fused with the door. Several times, especially during Stealth and Untouchable modes, I would be attacking an enemy who was coming through the door. And somehow, bears would be able to see or attack me even if the door was closed.

Naughty Bear could have been a lot of fun, but it underwhelms and under delivers. A major disappointment as it was one of the few summer titles that had originally caught my interest. Perhaps if the game had released with fewer glitches and more variety in the levels it would have seen a longer stay in my 360.