I took far too long to finish Persona Q. Not because I didn’t enjoy the P3/P4 crossover game, because I really did, even when I was stuck on a dungeon floor for three days figuring out the FOE pattern. There’s just something about Persona and JRPG games that makes me want to sink a ridiculous amount of time into them. I literally spent three weeks worth of evenings grinding my characters into the 90 levels and fusing new Personas to push my compendium completion to 90%.

I know. I have a problem.

This chibi-fied crossover Persona game is a canonical installment placing itself squarely near the end of both Personas 3 and 4 as evidenced by the fact that all party members on both sides are equally confused as to where the hell they are. I decided to lean toward the P4 characters, choosing Yu as my protagonist and leader of the combined squad. I believe this was heavily swayed by the fact that I love Teddie/Kuma and at times even had my Teddie Nendoroid by my side while playing. 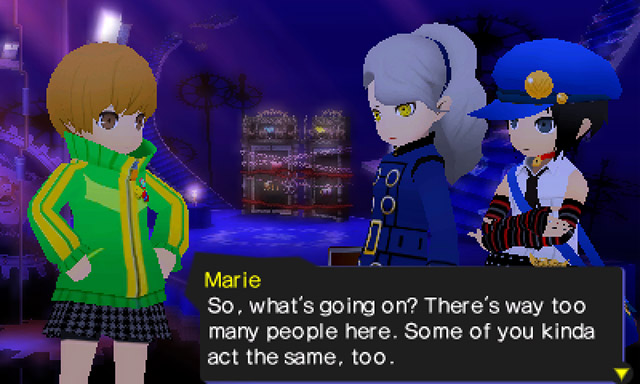 As the two groups work together to help Rei and Zen retrieve their memories as well as escape this alternate version of Yasogami High. New areas have formed inside the school, dungeons similar to the themes areas created in Persona 4. Each dungeon also has puzzles and unique rules that make progression a little more challenging, something I found both welcome and annoying at times. By far, the third dungeon was my favourite to explore. I even have a notepad on my phone with notations for helping me break a code.

FOEs, Field on Enemies, are an addition to the series from another Atlus title: Etrian Odyssey. These enemies differ from Shadows as they are visible on the gameboard with unique movement patterns. They can be avoided, and probably should be until you clear a dungeon, at which point you’re probably strong enough to take them on and scavenge their special drops. Persona Q was my first encounter with FOEs as I have yet to play any of the Etrian games.

QR codes are another new thing in Persona Q. Much like how you can share your custom designs in Animal Crossing on the 3DS, Personas that you have evolved can be shared. I found a few rare ones that I’d been missing for my compendium by scouring the internet, and also made a few codes for some of the stronger ones that I fused towards the end.

There are plenty of moments between dungeon crawling in which you witness the interactions between the two groups as well as the residents from the Velvet Room who have also been summoned to help. Theodore runs the shop (and turns those rare drops into powerful gear), Elizabeth in the infirmary (to heal and give you sidequests), and Margaret watches over the Persona compendium and sealed doors from inside the Velvet Room. While these scenes don’t strengthen Persona bonds the way socializing does in P3 and P4, simple things like giving them a new group name or fetching the correct snacks from the festival cart seem to improve the bonds between the two groups.

Persona Q and Persona 4 Dancing All Night have helped bridge this seemingly forever long gap between P4 and P5, and I love both of them for the new stories that have become part of the series’ canon. But can you blame me for wanting to play the next installment now? You have to blame them for creating such engaging characters and storylines that keep me coming back time and time again. I know full well that Persona Q is a game I will play again, especially since I have the P3 side of things to experience. Besides, it’s got Kuma and I don’t think there’s such a thing as too much Kuma in my life.