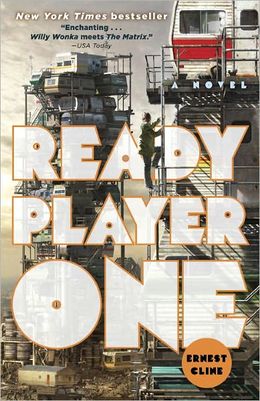 I finally got around to picking up a copy of Ready Player One last week. I’d been waiting for the paperback to come around and had a few other books ahead of this one on my list at the time, so I am a bit late to the party.

For people with no clue what this book is about, let me fill you in. Set in a future where jobs are harder to come by than they are now and where corporations truly do run the world, a mega billionaire video game programmer responsible for building the online universe known as OASIS passes away and leaves his entire fortune to whomever makes his/her way through his challenges first and finds his Easter egg.

Five years after the contest begins, Wade Watts, a welfare orphan living at the top of a mobile home tower (called Stacks), finds the first key and becomes the first person to get his name on the Scoreboard. Everyone has a renewed interest in the contest, including the IOI, a corporation that wants full control of OASIS and can only achieve it by winning the game.

Ready Player One appealed to me on two very important levels: first off, the fact that I am a gamer. While I’ve never been into MMOs and have always preferred single player games, I understood the world of OASIS and how it transformed into something more than what it started as. In a future as bleak as the one Cline delivers in this book, I too would seek some type of refuge in a virtual world of any and all worlds. A planet completely covered in 80s and 90s arcades? I think I’d be spending all of my virtual quarters there.

Secondly, the 80s. I was born in 1980; I watched Family Ties, Back to the Future, had an Atari 2600. While I wasn’t a teen during that time, as was the billionaire Halliday that made this time period so important to the hunters in OASIS, the good childhood memories I have come from all of the same places. Spending hours playing Q-bert, Galaga, and my all-time favourite 2600 game Dark Chambers. Sneaking off to the arcade in the mall and playing Pac-Man until my mom found me.

Wade’s adventure, both as his avatar Parzival and IRL (in real life), as he deals with the IOI threat, his new-found fame and friends had me reading this a lot faster than I had wanted to. But as I neared the end of the book, I gave up on pacing myself and plowed right through the final boss with him. Needless to say I was pleased with the results, satisfied with how Cline chose to end the tale. I am intrigued as to how a movie adaptation will differ from what I had the immense pleasure of reading, but I know I will make sure that if/when that happens I see for myself.

I highly recommend that if you are like me and enjoy a fantastic road trip through your youth or just love games that you give Ready Player One a read. My only complaint would be that I much prefer the cover art of the Spanish edition. While a picture of the Stacks is nice and doesn’t scream “GAMER” at non-gamer bibliophiles, I’d much rather have a copy be-speckled with Space Invaders. Right?