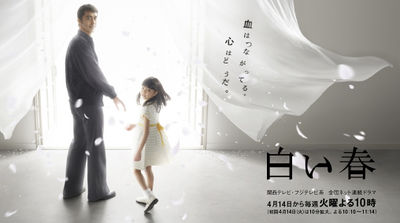 A heart-wrenching story of a man who discovers he may not have lost everything dear to him after all.  Haruo (Hiroshi Abe) has just completed a nine year prison sentence, and on the very first day of his freedom, his prison earnings are stolen at a restaurant. With nowhere else to turn, he looks up one of his yakuza friends. Haruo learns that the woman he loved became involved with another man, and later passed away. By chance, he meets the man’s daughter in a nearby park. Sachi (Ohashi Nozomi) is an artful and happy child, and Haruo sees so much of her mother in her.

But as Haruo and Sachi’s relationship grows, not all things from the past can be kept hidden. Haruo’s snoopy roommate, Shiori, does some investigating into Sachi’s father and mother’s first meeting, questioning who Sachi’s father really is: Haruo or the Baker.

Meanwhile, Shiori and her not quite boyfriend keep getting themselves involved in money making schemes and even involved with yakuza. This leads to more problems for Haruo, as he is trying to keep on the straight and narrow.

Shiroi Haru (White Spring) touches on a lot of family topics that are not Japan specific and is a completely wonderful and sometimes very sad show.