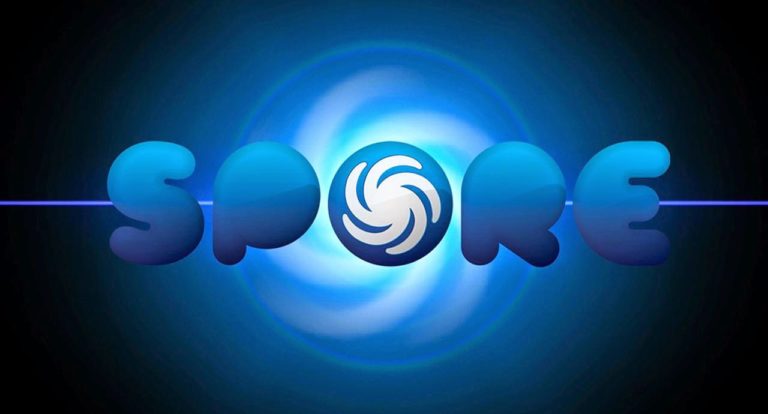 I never jumped all over the Spore bandwagon. To me, Spore was just an alien version of the Sims with some more customization and the added bonus of exploring the galaxy. Not my taste, but for a lot of people, Spore was going to be the next big thing. Sadly, it suffered from people finishing the game quickly and way too many people creating creatures not suitable for the Spore universe.

But this is not that game. In this game, you land on the planet as an egg stuck in a shiny blue meteor rock. These rocks are affecting the inhabitants, helping them evolve. However, there are other meteors which negatively interact with the planet being deployed by your nemesis. You must travel to all the areas available and locate pieces to add to the great idol statue, usually by battling a boss character and solving puzzles in order to reach hard to get areas. Once you pimp out the statue, an ancient god should descend from the heavens and save you all.

Plot seem a bit thin? Well, this is a game that I personally feel is geared more towards a younger crowd, hence the E10+ rating and the fact that it is on the Wii. The story is very linear: complete a quest, gain a new part (sometimes with an ability like swimming or flying), equip new part at nearest nest, access next quest, rinse, wash and repeat.

Customization is key in Spore Hero. It is a Spore title after all, and there are 327 parts for you to discover and edit your Sporeling with. You can morph body shape, add colour and texture, and equip and remove pieces as you need, maxing out or adding new abilities. Equipping parts depends on your blue meteor meter and DNA chain. Each part will cost you a certain amount of blue meteor to equip, however your equip limit depends on what level your Sporeling is currently at. There will be times when you may have to sacrifice one in order to use another. Not to worry though, seeing as nests are plentiful and you can edit as you wish.

You will find parts are easy to come by in Spore Hero. Whenever you locate a pile of bones, shaking the Wii remote will make your Sporeling dig, uncovering either a part for yourself or sometimes a part for the idol. Some bone piles are larger than others and will offer more parts. Keep digging until the bones disappear. Completing quests is another way to earn parts, as is battling other Sporelings and winning. In particular, you can take on the Combat Master in the Ancient Grounds. Defeating him in battle fifteen times will allow you to take away his title as well as gain one new part for each victory.

Ah yes, the battle system. I am going to be brutally honest here: I hate it! Sure, it seems simple enough when you fight your first battle. Simply shake to hit, B to bite and Z to block. Then they throw some more at you. Jump with A then shake to kick, etc. They continue to pile up fight combos, but when it comes time to use them in battle, half the time you can’t pull them off. The AI seems to recover way more quickly than you can from a hit, and they can also pull off an attack quicker, too. More than once I had to put down the controller and walk away for a while. Incredibly frustrating for me. 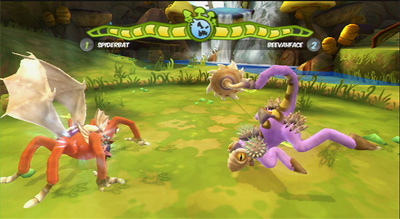 In addition to fighting, Spores like to sing and dance. Sing, you say? Yes. However no microphones are involved. When you are prompted to sing, its all about how your controller is angled and holding the A button during the appropriate times. Angled up, straight across or angled downward will cause your Sporeling to “sing” different melodies. Mimic the actions of the other Spore creature you are singing with and aim for 100%. If you do not reach 100% you will fail and have to retry. I did encounter a few instances when the Wii remote did not properly register the direction in which it was pointing had changed, so keep an eye out for that. Dancing works by shaking your remote, nunchuck or both in accordance to the instructions on the screen. Just like singing, you must get 100% in order to win. If you do not, you will have to retry the event.

Spore Hero seems a bit on the short side, too. I mean, yes, you can spend hours fine tuning your Sporeling to look however you want it to. But the fun in that only lasts so long. If you play more like I do, you can find yourself finishing the game in about thirteen hours or so, not incredibly long for a $50 game. That said, the game is still enjoyable. Yes, I hate the fighting control scheme and yes, I found it a bit short, but if I still have fun playing the game, then they obviously did something right.

Pick this one up if you find it new on the cheap – I’d say $35 and under is a good deal for the amount of play time you will get with it. There is a bit of reading but not too much, so if you buy this for a younger child or one with lower reading comprehension you may need to be nearby to give them a hand.

Review product was provided by Electronic Arts (EA), and does not affect the outcome of this review.