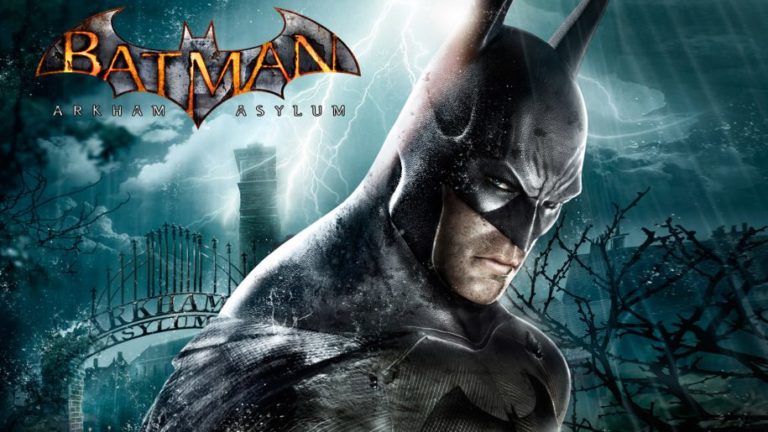 I have never been the biggest fan of comics or comic based video games (and even less of a fan of comic based movie video game tie-ins). However all the hype about the latest Batman installment from the team at Rocksteady had me extremely curious, so I sat down and put a few days into the story mode of Arkham Asylum and was pleasantly surprised with the results.

When Batman captures Joker a little all to easily, he escorts the maniac to Arkham Asylum where things are not at all as they seem. With the assistance of the ever doting Harley Quinn, Joker and his men have set a trap for Batman, but that’s not all. Joker is back here for something very special, and by no means does he plan on letting Batman ruin all his fun.

Arkham Asylum is a basic action adventure at its core. Exploration of each room is a must as some rooms might require grappling or shuffling through ventilation corridors to exit. Using the LB (left bumper) you will activate Detective Mode. This mode will hone in on certain items in rooms, allow you to see the heart activity of nearby friend and foe, and even lets you know upon entering an area how many guards are in proximity to you, whether they are armed or not. While in this mode, you can also scan items by holding down the LB. This will help with solving the Riddler’s puzzles which are scattered all over the island, among several other uses.

Stealth is your friend in this game. While it can sometimes be fun to just charge into a room, odds are it will either get you killed or kill the hostage you are trying to release. Crouching, grappling and timed explosives will give you the upper hand in battle. There will be some battles that seem to take forever purely because you need to use stealth the entire time. And while not necessarily a bad thing, there is at least one instance in Arkham Asylum that I did think it was a little too much as baddies tend to flock together when they see you’ve taken one of them out. Waiting for them to separate so you can continue to pluck them off one by one does get a bit tedious at times.

When you encounter enemies and begin to fight, the game does seem to have a slight bit of slow down, which I believe really helps you to realize that you are indeed in a battle. Performing combos is a big boost when duking it out. Not only do combos give you more points to unlock upgrades, but special finishing moves can be activated when a certain number has been strung together. Silent takedowns performed by crouching and sneaking up on your foe are a great help when facing armed opponents. Also unlockable is the inverted takedown, perfect for those times when you want to hang like a bat and scare the daylights out of Joker’s henchmen. I will admit, some elements of the game do get repetitive after a while; you can only grapple, glide and takedown so many times in a row. Some of the boss battles also follow repeat patterns, showing a lack of care for mixing it up a little.

And what would a Batman game be without the gadgetry? As you progress through the island you will find more than just your Batarang. Explosive gel, Batclaws and more land in your lap, and are extremely helpful in hunting down Joker and uncovering his scheme. To quickly use your Batarang, double tap the Left Trigger. This works great for ripping apart the chattering teeth and stunning big baddies.

For those of you who are completionists, you will want to keep your eyes peeled for all of the secrets Edward Nigma, aka the Ridder, has planted on Arkham Island. Not only will you find various gold and green coloured trophies hidden in vents and behind breakable walls, but other challenges await you, too. When you enter an area in which a riddle is hidden, green text will pop up on the screen. Somewhere in this area is the answer to Riddler’s question. Use Detective Mode and remember to zoom with the right analog stick to find the answers you seek. Correct answers, locating his secrets maps, destroying teeth and finding trophies not only give you points towards upgrades, but they also unlock new Challenge Maps for you to use (outside of story mode). Getting some of these items will mean backtracking later on in the game, as you will need to acquire more gadgets to reach certain areas.

Rocksteady really did a wonderful job with the voice casting and overall sound work for Arkham Asylum. Mark Hamill returns to voice Joker, a role he has filled many times in the cartoon world, and does a spectacular job. Overall ambiance with the background tracks for the various sections of Arkham and other sound effects really add to the experience. Paul Dini wrote the story for Arkham Asylum which is probably why it doesn’t come across as one of those poorly done comic to game translations.

All in all a pretty good game, great for increasing your gamerscore a bit. If you are a huge Batman and comic book fan, then this is a solid addition to your game library. If not, I would recommend renting this for the weekend. I made it through the game in a few days’ time on the easiest setting and avid fans playing on harder difficulties will probably finish the game in about the same time as I had.