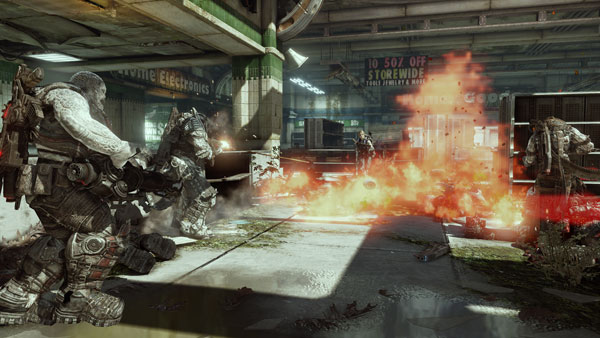 Last year, I was bitter when Gears of War 3 was pushed back by Microsoft in what appears to be an effort to bolster their Holiday 2011 calendar. Not just mildly upset, but really very mad about the whole thing. I was angry the game had been moved for fiscal reasons, but after spending the past week with the beta, I can honestly say I am glad that Epic has been given more time to flesh out the game and make sure it is as close to perfect at launch as it can be.

Instead of begging, pleading and doing ridiculous things to Twitpic for Cliffy B on Twitter, I waited for my pre-order code from GameStop to be valid and spent a good amount of time playing King of the Hill and some Team Deathmatch during what was Week 2 of the Gears 3 Beta. With the help of good friends I was able to get back into the swing of Gears, having not touched Gears 2 in well over a year. They were patient with me as I got accustomed to the controls and worked on catching up to the rest of them. New friends were made, good times were had, headsets were used, the Humpty Dance was sung.When I first jumped into the beta I spent a lot of time playing King of the Hill. It had just unlocked at the start of Week 2 meaning everyone who was in the beta the week before would be cramming in the necessary 20 or so matches they needed in order to unlock new weapon skins and characters. Those first couple matches for me were brutal. I couldn’t remember how to reload or switch weapons and I kept getting stuck in cover at the worst possible moments. (Hell, I still do but more on that in a bit.) This mode is pretty reliant on cooperative play. A timed ring appears on the map and you must rush to claim it for your side in order to earn the points it doles out. Your control over the ring can be broken by an opponent who blasts his way in and kills you all, thus taking it for themselves. First team to reach 170 points takes the round, and matches are always best of three no matter what mode you are playing.

After getting all the games in I needed for KOTH I moved onto Team Deathmatch, the only other mode available at the time. Each side is allotted 15 respawns, meaning you need to be more cautious of your actions and using teamwork to flush out the last man standing (or hiding somewhere with the Boomshot, just waiting to blast your head clean off your body). Deathmatch is what everyone wants to play and what everyone goes back to as soon as they clean up their required games in the other modes. It’s the most competitive here, as the K/D ratio for some people is sacred and more important than bodily nourishment.

As I write this, I am about a dozen or so matches away from finishing up the Capture the Leader matches that I need for those unlocks. As you could probably guess, CTL is similar to Capture the Flag. Your goal is to defend your team leader and capture that of the enemy. There is no base to take the captive back to, so it’s really all about finding a good spot to hang out in and make sure your team comes out victorious. One player is randomly selected as the Team Leader at the beginning of each round, meaning there can be up to 3 different leaders per match. Respawns here are unlimited and the Leader never dies. Of the maps I’ve played this on, I think I prefer Checkout, an upper level department store inspired map. There are some very defensible positions you can hold down with minimal worries about having the enemy respawning right in your lap.

My overall favourite map in the beta is Old Town. It could be because this is the map the people I play with prefer to use, however I think it’s more likely that it’s the one I know best, with Trenches a close second. Old Town is just beautiful, scenic and has all kinds of wonderful little hiding spots. And it has the chickens. Those poor little chickens, often in the line of fire and too stupid to just leave the area. I like to take a moment when I spawn by the waterside to just look out at the shimmering clear blue water and think “What a lovely place to slice someone in half with a Lancer!” There is a glitch on Old Town when playing Capture the Leader that I noticed today. On the side of the bell tower close to the blue boat there are some benches that I’ve seen Leaders somehow climb up onto which seems to glitch them into the side of the building. So no matter what you cannot grab them when they are vulnerable to being captured.

Trenches is a dusty, grungy mining area which for obvious reasons is nearly 100 percent various shades of brown. There is also a loud siren that goes off just before dust storms move in, kicking up clouds so thick it’s nearly impossible to see more than a foot in front of you. Trenches is the map where I became familiar with the Oneshot, a super powerful sniper rifle that I have fallen victim to several times. You can also find a couple of Boomshields and the Mortar here, and if you’re lucky a handy dandy Scorcher to light the place up.

The Gears 3 beta is loaded with powerful weapons, old and new. It wouldn’t be a Gears game without the trusty Lancer, standard issue COG equipment. You can also use the Retro Lancer, it’s bulky and slightly less accurate predecessor, complete with it’s poor aim and actual lance-shaped tip perfect for spearing your opponent in the gut. I’m not a huge advocate of the Retro for two reasons: the first being that I am not great with feathering the trigger to get those really accurate shots, and the second because seeing people just running around like idiots trying to get their Retro Lancer executions annoys me greatly. During the beta you can select either Lancer or the Hammerburst as your main weapon and between the Gnasher and Sawed-Off Shotgun for short distance fighting. (You can also change your load-outs while you wait to respawn if you don’t like what you’re using.) I am really hoping the Sawed-Off is moved to the power weapon category as it seems far too powerful not to be in that category. So many people I have played against would rather charge at you with their Sawed-Off than use any sort of strategy to play the game. While this isn’t the case for everyone, it’s become enough of an annoyance to make me hope it will join the Boltok, Gorgon, Boomshot et al. and we’ll have a standard shotgun as a secondary option alongside the Gnasher in the retail version.

There are things that bother me that I had hoped would have been fixed before the beta launched. Like getting stuck in cover during a roadie run or trying to pull off a wall but not being able to. These were issues I had with Gears 2 and I thought would have been higher on the list of improvements and fixes for the third installment. I’ll be in the middle of running and barely nudge the side of some sandbags when I’ll find myself taking cover and promptly being lanced from behind. That is not cool. Or I’ll be in cover and trying to roll out of the way of someone charging full speed ahead with the Sawed-Off, only to find that I must have been swimming in a vat of superglue 5 seconds earlier. While these may seem like minor issues to people who aren’t familiar with Gears of War, being able to effectively use the cover system is imperative to one’s survival. That and being able to get out of cover when you see someone lobbing an ink grenade at your face.

Ribbons and medals have been a nice added touch to the beta and I’m looking forward to earning them all over again once Gears 3 hits the shelves. While I know I will never get one of each ribbon, I know I’ll be having a great time doing my best to help others out (as evidenced by the vast amount of Personal Assistant ribbons I’ve collected already). Ribbons are small acknowledgments of your round per round achievements, like being the first one to die, assisting on 5 kills, being the player on your team who spent the most time in cover, multiple kills with one shot, etc. Medals celebrate your overall achievements. Some are silly, like playing so many times as a female or performing X amount of executions, and can be earned up to four times, with each rank requiring more effort to reach. These medals also come with some nice bonus points toward raising your overall rank. Ribbons give you some points, too, but medals and performing well in each round you play are where the real points for ranking up lie.

Well, it’s back to the beta for Week 3 for me. I have reached Rank 11 and I am hoping to at least unlock all of my weapon skins and characters before the beta comes to an end. I still haven’t unlocked my Golden Lancer! Here’s hoping I can at least have that accomplished by the end of this week.