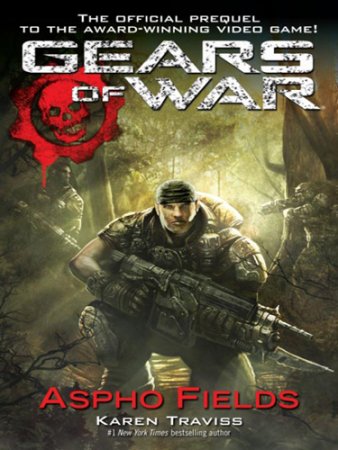 As a huge Gears of War fan, I was excited when Epic and Random House announced that there would be novels filling in some of the gaps and back story behind the award winning video game franchise. This first novel would not only take us back to the often referenced battle at Aspho Fields, but would help fill in a few gaps on what happened between the first and second video game.

When I first bought the book, I was all gung-ho on sinking my teeth into it. I had a flight from Toronto to Atlanta, so I figured even with a bit of a nap I would be able to get through a few chapters easily. I only made it a couple of chapters in before I realized the tale was a bit too dry for me. I wanted to love it as much as I do the games, but it was incredibly hard for me to get into. Maybe it was Karen Traviss’ heavy use of military jargon during those first chapters, not that it was out of place in a story of this nature. Really, it was expected.

After unsuccessfully getting Apsho Fields to cling to my brain, I put it down for months. I felt bad seeing it on my shelf and having no inclination to return to it any time soon. It wasn’t until the second Gears novel came out that I decided to give it another go. Round two meant starting from the beginning and fighting my way back through those same pages, forcing myself to get past the part I struggled with.

Second time did it, and soon I was reading all about Marcus’ childhood, meeting Dom and Carlos, joining the Coalition of Ordered Governments (the COG) – all told as flashbacks while we experienced the events between Gears of War and the sequel. As I made it to the final third of the novel, I found myself extremely glad to have given Aspho Fields another shot. First time out of the gate, there are always initial bumps in the road that need to be worked out, especially when novelizing popular video games. Ms. Traviss did a wonderful job blending Marcus’ past and present, utilizing story elements that fans knew of and integrating what we knew nothing about. She masterfully led us through the final days of the Pendulum Wars and showed us the origins of the Hammer of Dawn.

Most of Aspho Fields focused on characters we already knew: Marcus Fenix (by extension his parents), Carlos and Dom Santiago, their commander Colonel Hoffman, Anya and Helena Stroud, and also introduced someone who would become a favourite of mine in the Gears universe, Bernadette Mataki, the Islander woman who whipped Fenix and Santiagos into shape as young Gears. As I continued to enjoy the Gears novels, Bernie kept growing on me until I found I loved her as much as I loved Marcus and Cole.

Aspho Fields was handled in a way I wish the rest of the novels had followed; we were given an amazing bit of back story with a bit of filler to help bridge the gap between the two games. Just enough canon so as to not require fans of the universe to need to read it to know the full story, but an added bonus for those who did. Truly everything a tie-in novel should be.