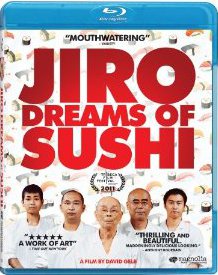 Whenever I am asked what I want to eat, sushi is always the first answer out of my mouth. That said, we don’t often go out for sushi since dinner for two often ends up costing a pretty penny in these parts. Even the all you can eat sushi magnificence that is Nori Nori has skyrocketed out of our price range in the last two years. So I’ve learned to savor the opportunities I do have, enjoying and appreciating my favourite meal more than I ever did before.

I’ve always known that it takes years upon years of dedication to become a sushi master. Working their way up from scrubbing pots in the kitchen to the day where the master of the restaurant trains them to slice the fish and prepare the sushi for the guests can seem like a harsh road for some, but those who succeed are truly skilled individuals with a real passion to serve the best hand molded morsels.

At 85, Jiro Ono owns and operates a three Michelin star sushi-ya, Sukibayashi Jiro, tucked away in the lower section of a train station in Ginza. It is here that Jiro serves lunch and dinner tasting menus to his loyal patrons in a space that barely seats ten guests. Reservations need to be made at least a month in advance and confirmed the day before so that Jiro and his staff can ensure their guests enjoy the best possible dining experience.

Jiro works alongside his eldest son, Yoshizaku , who will one day take over for his aging father, but for the time being has taken on only a few of the tasks his father can no longer oversee. This mainly consists of the morning task of selecting the best fish available from Tsukiji Market, helping to train the apprentices, and preparing sushi on the rare occasions where Jiro is away from the restaurant. The youngest son operates a second, mirrored restaurant in Roppongi Hills where prices are lower since customers are not willing to pay what Jiro’s home location asks when it isn’t the legend himself preparing the food.

However, Jiro’s success did not come without sacrifice. His years of dedication to the art of sushi meant long hours every day away from his family, meaning that until his sons had finished high school he barely spent any time with them. Throughout the documentary Yoshizaku and Jiro talk about discovering a father and son relationship after so many years of neglecting one.

David Gelb’s documentary, Jiro Dreams of Sushi, takes us behind the scenes of Sukiyabashi Jiro, exposing Jiro’s continuing desire to create the best sushi as Yoshizaku takes on more responsibility, hoping to live up to the legacy his father has built for him. It is an insightful and wonderful look not only at sushi culture but also Japanese work ethic and family traditions that have been dominant for generations.