We all have them. One or two games on our shelves or hidden within a Steam collection that others would make fun of us for owning. I for one have poked fun at people buying games that probably never should have been made in the first place. Or ridiculed near thirty year olds for playing Pokemon. They are an easy target. I just can’t help myself.

My first guilty pleasure was introduced into my life by someone I know who absolutely loves the Dreamcast. It was there that I was first introduced to the boob-defying physics of the Dead or Alive girls. I was not the best DOA player. I pretty much knew about five of Lei Fang’s moves, button mashing like hell. Fast forward to the Xbox. Team Ninja announced they were going to make a volleyball game featuring the girls from DOA. Even though I knew the game was geared toward guys who wanted to see hot video game girls in barely there bikinis, I got the game.

First things first, I cranked my age to 99. Why? Well, if you are not familiar with the series, the older you are the more the boobs move. And its not like a normal woman’s breasts move when they are bra-less. Its like they are in an anti-gravity chamber. Those things just go every which way. Then I took Lei Fang to the beach and began to make friends for some 2 on 2 beach volleyball fun.

Once I started playing I just couldn’t stop. It took a while to get used to the camera and judge where I needed to run in order to make contact with the ball. Then I was bringing in the cash. At first, all I cared about was making money to spend on all the little trinkets and make other girls my beach partners. Soon enough I got hooked on buying the swimsuits for my girls. There was this urge to make sure I had every swimsuit in every girl’s closet. To this day I never have achieved that goal. Girls can be fickle with gifts. Nothing was worse for me than seeing Tina throw away a million dollar bikini that I pool hopped for hours to make the money for.

Eighty-six hours I gave to the first game.

And then they announced a sequel.

I pre-ordered the second game. Hell, I had so much fun with the first game, why not? I remember being laughed at by the manager (and friend) of the EB Games where it was waiting for me. This time the game would be in Hi-Def, there would be more outfits, and the new jet-ski racing looked like a lot of fun.

Thirty minutes later I was returning it to EB. I was so disappointed with the game. I was having major glitch issues, the jet-ski racing sucked. Not worth the $70 CDN I spent on it (at the time the CDN dollar was pretty weak, and $70 was the standard price for new release games).

A couple years later I found myself managing an EB location. This is a bad job to have when you are a gamer like myself. Every time a new game comes in, you add it to your hold pile. Rare games come in on trade? Dibs! And you are always the first to know about heavily discounted games. So when DOA XVB2 came in on trade for $34 used, in mint condition, I caved and re-bought the game. After discounts it cost me less than $20. That was a price I could justify for the game. Three months later, the new copies of the game dropped to $10 when the company needed to move stock. 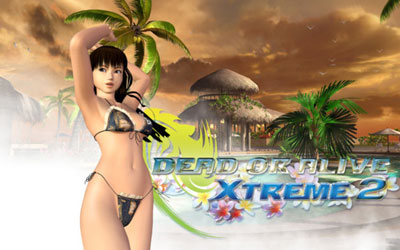 I will admit that I haven’t sunk another eighty-plus hours of my life into the second game. I have played it a few times, collecting whatever bathing suits I can for my girls. As always I am 99 years old, and I laugh when I go pool jumping. There is just no way that a real girl could keep her balance if her breasts were that large and her body so petite. But its a video game, and while it does bother me that more often than not female characters are always so ridiculously drawn, I remember that DOA really is making fun of itself and the people who continue to create these impossible women.

Originally posted on GamingAngels.com on Dec 29, 2009