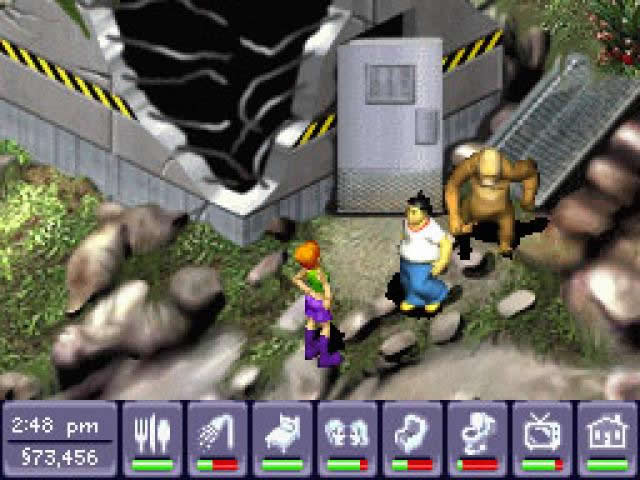 While I was grinding up in Golden Sun: Dark Dawn to take my second go at the final battle, I decided I needed a bit of a break and went through our DS game shelf for something new to play. I wanted a game I could play while sitting beside my husband and watching TV shows at night while he programmed. His copy of The Urbz jumped out at me, seeing as I’ve been addicted to Sims Social on Facebook. This way I could have my Sim time without being in the other room. A win-win.

The Urbz drops you into the life of a young adult Sim trying to make it in the big city. You’ve lost your job and place to crash when the owner of your building is strong armed by Daddy Bigbucks into selling. The construction mogul has plans to claim Miniopolis as his own, and it’s fallen on your shoulders to keep that from happening. If you hope to put an end to his evil plans, you’ll need to form strong relationships with your neighbours and lead the fight for freedom.

First you need to get back on your feet – easily done by getting in some work. There are several jobs (mini-games) in Miniopolis that open up as you progress, but I always found myself heading to the roof of the police station to play Hoops during the day. You can make some serious money there after leveling up your body skill and playing time and time again. My second favourite job was telling jokes at the pizza joint. If you don’t mind getting your hands dirty, you can collect trash and recyclables to turn in at the police station. Gets you some more pocket change and helps keep the streets clean.

With some money in your pocket, you’ll need to hit up a place to stay. Sure, you can bum around, sleeping on benches and trying to clean up nice in a sink somewhere, but nothing beats getting your own place and maybe a roommate. At least a roommate beats loneliness, ensuring you always have someone around to talk to. They can be horrible for your stuff though, and completely useless against thieves. I can’t even begin to explain just how many times they’ve let valuable items just walk out the front door and never clean up after themselves.

But you’ll be going nowhere if you don’t raise your relationship status with your neighbours. Chat them up by selecting appropriate phrases and running errands for them in order to open up quest lines. Relationships will fade over time so do you’re best to keep them up as best as you can. Some quests will require a certain overall relationship status to progress and it’s a blessing if you’ve been on top of this the whole time, not spending hours running around looking for people because you slacked off (like I did).

You can also align yourself with one or all of the cool crowds in town. You’ll gain rep with each group as you befriend members of the gang, and eventually open up specific Rep quests. Each quest requires you to be the best at one of the job mini-games (determined by which group is asking), for you to bring them or trade in X amount of items, etc. Completing these tasks will grant you access to their respective club rooms.

One of the neat bonuses in The Urbz are Xizzle Beads. Usually collected by gabbing up and befriending your fellow Sims, these can be exchanged for perks at Club Xizzle. Each perk costs three beads which may scare you from using them at first, but don’t be. As long as you use them wisely in the beginning, by the time you finish the game you’ll have purchased every bonus there is. Available are the common Sims game perks for slower deterioration of bladder, hunger and sleep. I started out with the one that lowered my weekly rent, a major plus when you’re struggling to furnish the place (and when things are frequently stolen).

Not everything is perfect here though. The Urbz was a launch title for the Nintendo DS, so there are a few things that probably could have used a bit more QA time but can mostly be forgiven. There is at least one Rep guest that glitches out nine times out of ten, a few issues with buying/selling items at vendors where stylus taps don’t register or double up and cause you to sell/purchase items you didn’t intend to.

The best thing about Sims games are that you always know what you are getting yourself into. It may have a new coat of paint and story to go along with it, but the familiarity of the game play and controls is what keeps the fans coming back time and time again. The Urbz was just what I was looking for when I grabbed this oldie off the shelf; my Sims Social addiction had recently spurred a desire to go back to the Simverse. Here I had a structured game with quests that didn’t require me to buy those cursed Facebook credits or pester my friends in order to complete them on time for rewards. Such a relief!!

You can purchase The Urbz via Amazon