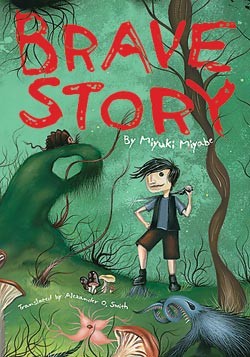 Fifth grader Wataru Mitani’s world is on the verge of a major upheaval when he first starts investigating the abandoned construction beside a local shrine. Students in his school are rumoured to have seen ghosts here and Wataru is intrigued. One evening, he sneaks out of his family’s company apartment to meet up with his best friend Ka-chan and see the ghost for themselves. But their attempt is foiled when the building’s owner shows up and brings them right home.

Wataru’s uncle comes to visit him one afternoon and he takes his uncle to the abandoned building. This time, Wataru follows an old man up to the very top of the stairs and stumbles into the world of Vision. He is rescued by a large bird and brought back to the entrance known here as the Porta Nectere. He is told that over time he will forget about this place, and only those with the title of Traveler may enter. He wakes up at the bottom of the stairs, and his uncle brings him home where they discover some terrible news: Wataru’s father plans on divorcing his mother and leaving to be with a mistress.

His mother is unable to cope with the divorce. She rarely eats and keeps holding onto some hope that her husband will come back. Her mother in law and Wataru’s uncle try to help as best as they can, but after a confrontation with the new woman in her husband’s life, she succumbs to her grief and tries to commit suicide.

In the haze of the gas-filled apartment, Wataru is rescued by a schoolmate named Mitsuru, given a token and told to remember Vision and the Porta Nectere. Once he calls an ambulance to take care of his mother, Wataru heads back to the abandoned building and enters Vision, hoping that he can change his destiny.

Vision reminds Wataru of his favourite RPG series with it’s magic and fantastical creatures. He is set on his path by the old man, Wayfinder Lau, who explains to Wataru that he will need to find five gemstones to place into his newly acquired Brave’s Sword if he wants to open the path to the Tower of Destiny and meet the Goddess. And thus Wataru begins his journey, making friends and helping those he is able to during his quest.

Wataru has ninety days while the Porta Nectere is open to find his gemstones and change his fate, but events in Vision threaten to keep him from reaching his destination. There are those who denounce the Goddess and want to snuff out her believers, others who believe the non-human races are inferior and should be wiped out, and Mitsuru himself standing in Wataru’s way.

But the biggest obstacle of them all just may be Wataru himself. Can he find the strength he needs within himself to see his quest through to the end?

Brave Story is a solid tale focused on Wataru’s personal growth as he learns to face his fears and weaknesses, becoming stronger with each passing day he spends in Vision. Ultimately, Wataru learns what it really means to be able to change your own destiny.

You can purchase Brave Story from Amazon or RightStuf