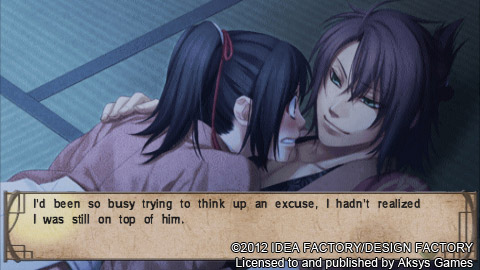 My weakness for feudal Japanese tales always gets the best of me. Slap in the “Choose Your Own Adventure” twist and a bevy of hot samurai and you have won my love.

Set in the late 1800s, Chizuru sets out from Edo to search for her father. Their letter correspondence ends suddenly and worried for the only parent she has, Chizuru makes her way to Kyoto hoping a friend of her father’s can shed some light on the issue. When she finds herself witness to one of the shogunate’s dirty secrets, Chizuru finds herself a guest in the home of the Shinsengumi, defenders of Kyoto from the unruly ronin who now roam the country.

The Shinesengumi are not only trying to protect Kyoto from the unruly ronin, they are also fighting to keep the ways the Japanese have always known. The world around them is shifting to adopt the ways of the Westerners and heading towards a purely Imperial rule. They soon discover a supernatural force is aiding the Imperialists, demons who seem to know something about Chizuru that she doesn’t. 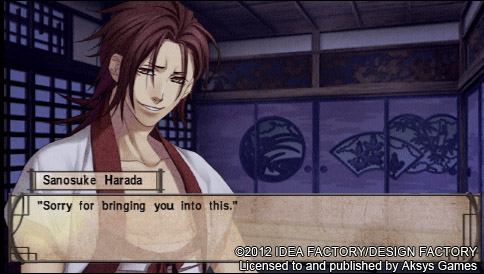 The setting for Hakuoki may seem like something out of a Lian Hearn novel but it is important to remember that this game is ultimately more about the wooing than anything else. You may be disguised as a young man to keep you safe, but you are living with some of the hottest men Kyoto has to offer. There are five men from the small handful who know your true identity for you to cozy up to: Hijikata Toshizo, the commander of the Shinsengumi; Souji Okita, master swordsman always ready with a joke; Sanosuke Harada, a real softy under is tough exterior; Hajime Saito, the quiet Iai master; and Heisuke Toudou, the youngest and most headstrong of the Shinsengumi captains.

Chizuru’s tale follows set events that will be slightly altered or presented differently depending on which actions you choose for her. Certain potential suitors will prefer one response over another, with positive actions for that particular man highlighted with cherry blossoms floating before them. For example, one of your first choices in the game will be to either find a way to escape or attempt to explain your situation to the Shinsengumi captains. Choosing the first option will help sway a couple of the men to your side and the opposite will do the same for the other two. It is important for you to decide who it is you wish to pursue early on so you can focus your attention on that person. I also recommend saving right before making your choices (which is easy to do seeing as you can save at any time after you’ve been captured). 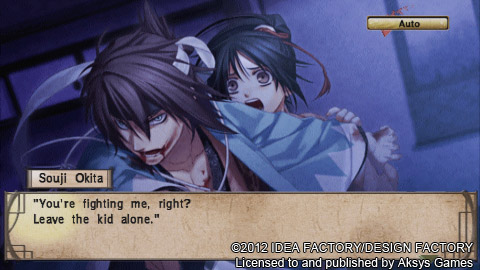 For my first time through, I didn’t particularly focus on any specific suitor, although I had been making some progress with the boyish Heisuke before trying to see what would happen if I switched focus halfway through. Needless to say I ended up with the worst possible ending: being alone. There is nothing worse than getting the worst ending possible, but I looked at it as getting that one out of the way early and picked a target for game number two: Souji Okita.

With Souji in my sights (and with the help of a poorly translated walkthrough for a couple of scenes), I was able to weave my way to his various story endings. I started with the happiest one, and then went back to make changes where I needed them to see the others. This time through I met characters I hadn’t in my first attempt at happiness and learned new things about Chizuru. I was more than satisfied with this happier ending.

There are up to nine chapters for you to experience in Hakuoki – determined ultimately by the choices you make in men. At the start of Chapter Four you will find yourself traveling with the person whose ending you will most likely see. Because of my choices in my first game, I ended up traveling with the one non-Shinsengumi love interest of Chizuru’s, but due to the path I took, I did not get that character’s ending or unlock his Chapter Six synopsis in the Records of Service. The Records of Service are located in the main menu and show you which stories you’ve unlocked along your way. Souji’s story went seven chapters long; the longest is Hijikata’s at nine. 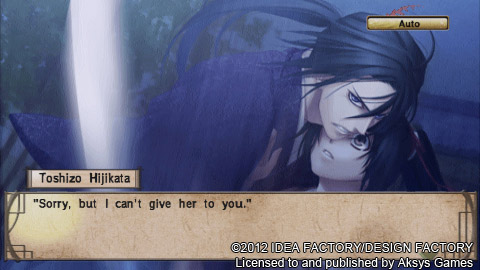 One of my favourite features of Hakuoki is the ability for the player to “rewind” a scene to a certain point in the chapter, allowing them to replay an event or backtrack without having to save to quickly change the decision you just made. It also helps if you’ve been button mashing to scroll the text faster and end up missing some dialogue because the line is shorter than you think. That happened to me quite a bit, seeing as I am a fast reader and letting the text load itself was slower than I liked.

Hakuoki also proves a handy encyclopedia of terms of the people, places and Japanese words used in the game. You’ll notice that as you experience different versions of the story, new words will be added to the glossary. Another bonus is the Theatre in the Media section which allows you to re-watch endings you’ve unlocked.

There aren’t many visual novels available in the North American market for consoles or handheld systems, as what few there are tend to be PC/MAC only, so Aksys took a bit of a risk in bringing Hakuokiover here. Not to mention that this is a game geared toward the female otome genre fan, narrowing it down a touch further. But otome fans who are starved for English translated games will enjoy having a portable game to keep them entertained for hours as they explore the various relationships available to them. And it doesn’t stop there, as there is a whole slew of anime which spawned after the release of this game in Japan for us to watch as well.

Which I will get around to, just as soon as I finish unlocking every ending.

Purchase Hakuoki: Demon of the Fleeting Blossom on PSP from Amazon