My addiction to Kingdom New Lands is all Candice’s fault. After watching her and Klaus stream the original Kingdom game (now Kingdom Classic) on our Loot Crate stream one afternoon, I immediately jumped onto Steam to pick it up. And for a month I ignored everything else in my backlog until I “beat” the game.

*Warning: This post will contain some spoilers. Sorry, but that’s just how it goes with a game like this.

And then those sneaky sneaks went and made a new version, with all sorts of fun updates that dragged me right back into it. Sorry, Tokyo Mirage Sessions!

There I was, ready to drop $15 when I discovered that anyone who previously owned Kingdom got the new version for free. I would gladly give them more money, but I will take free and perhaps gift a copy to someone else to spread the love. 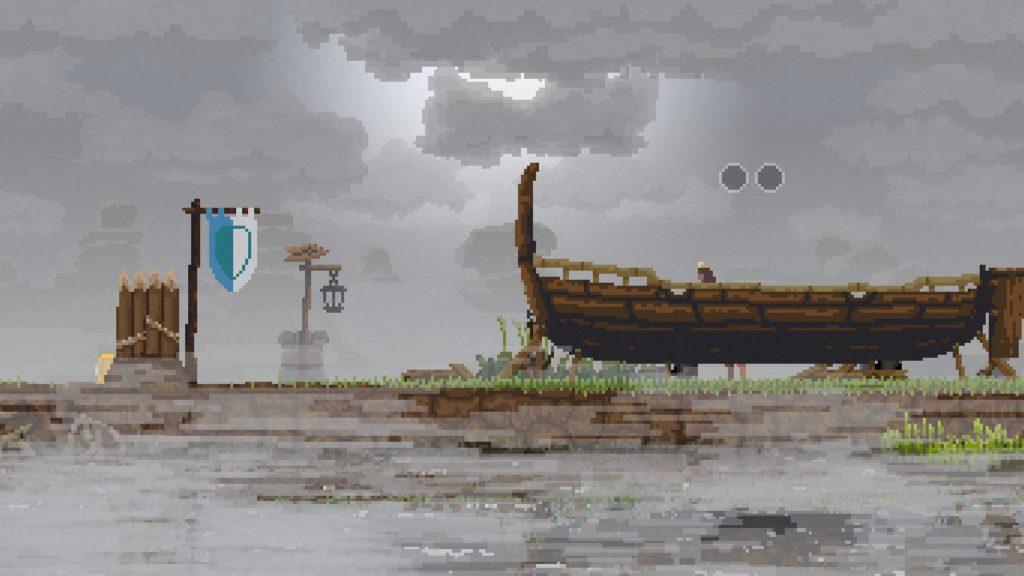 Kingdom is one of the most simple but complex games I’ve ever lost an entire day to. The premise is to recruit men to build and defend your small kingdom from the monsters that inhabit it. In Kingdom Classic, the game ended once you destroyed the portals from which the Greed spawned. Kingdom New Lands changed that by switching things up. Now you want to build and defend but in order to defeat an island you must build a boat and successfully leave the island.

There are a total of five islands to explore and each one has different unlocks for you to discover. The standard archer and builder statues make an encore, and joining them is a farmer statue, which looks to hurry the growth rate of crops. I’ve found myself using that particular statue a lot in my current game as my farming space is quite limited on my current map and I needed oodles of coins to build that boat.

Make sure to run the island from end to end in search of Signposts. For two coins you can purchase the attached map fragments, which is how you will unlock all of the cool stuff to find on the map. 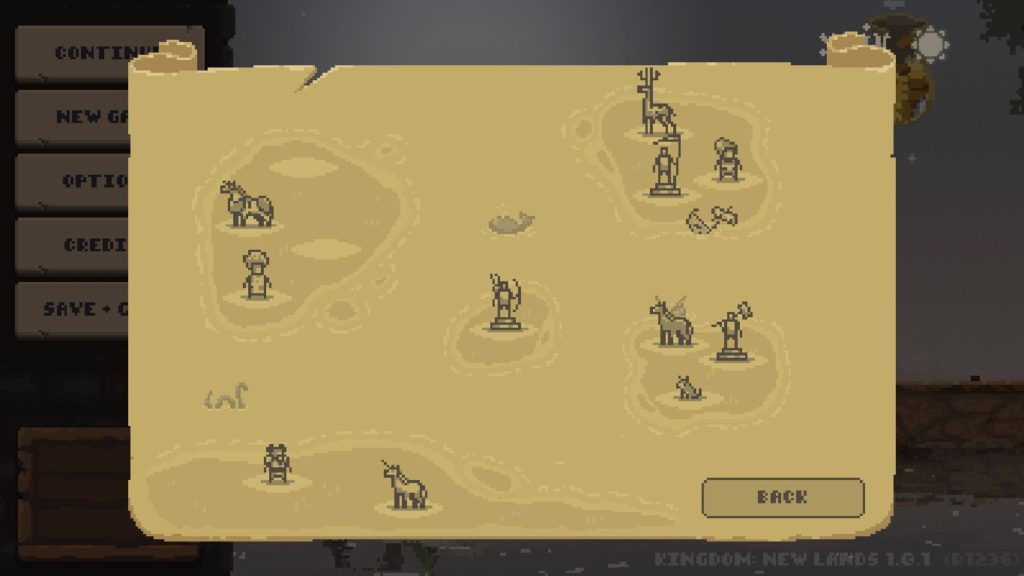 A new building has appeared! This little cabin in the woods can house one of three cute little old people who can provide new options to those archer towers (and more than one cabin can be generated on a map). My favourite is the baker. With her poofy white bonnet, the baker can change a fully upgraded tower into a bread oven. The scent lures men from their homeless camps in the woods, making it easier to recruit especially on the 4th and 5th islands. The man with the Robin Hood hat will change an archer tower to a ballista operated by a single builder, while the man with two small tufts of white hair gives your tower an upgrade that offers an extra Knight.

As of the second island, you gain the ability to add a companion to your party. Should you choose to accept him, your dog will bark at night in the direction the Greed are coming from. You just need to make sure the Greed don’t snap him up because you won’t be able to get another until you travel to a new map. (Same goes for those cabin-dwellers.) 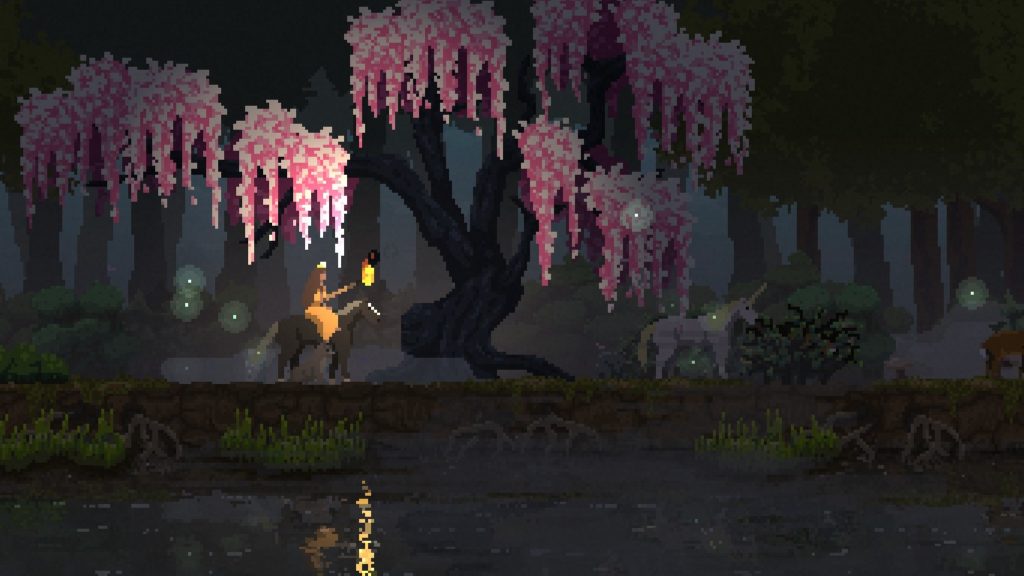 Let’s talk mounts. Your default mount, loving named Biscuit by Candice, is slow. He needs to stop to rest and eat grass a lot. I hate Biscuit. So the first chance I get to switch mounts, I take it. There are three new mounts that I am aware of: the Stag, the War Horse, and the Unicorn. I adore the Stag. He gives off pheromones which cause the deer to fall in love and follow you, even if that means into a team of archers. This is great if you have no farmland yet and need to earn more coins or are going after that 8th Day achievement.

I’m not particularly sure what the War Horse does. I have seen him flash and any recruits around him flash in response, but if there is a perk, I haven’t figured it out yet. The Unicorn (which I have dubbed Butt Stallion) poops out three coins whenever it stops to eat grass. This is super handy when you’re running low on funds, like when you forget to bolster up your walls and the Greed decimate an entire side of your kingdom. I’ve heard rumours of a Bear mount, but as you can see from my map above, there are a couple things left for me to unlock on the fourth island.

Remember the Merchant? You’d give him some coins and then he’d wander by your castle and drop off randomly determined tools. Well, this time around he brings you money! Just so long as you don’t clear away the trees around his camp. Give him a coin, he returns with eight or so. He only appears on the first three islands, so try to bring a full coin purse with you on journeys to the 4th and 5th. 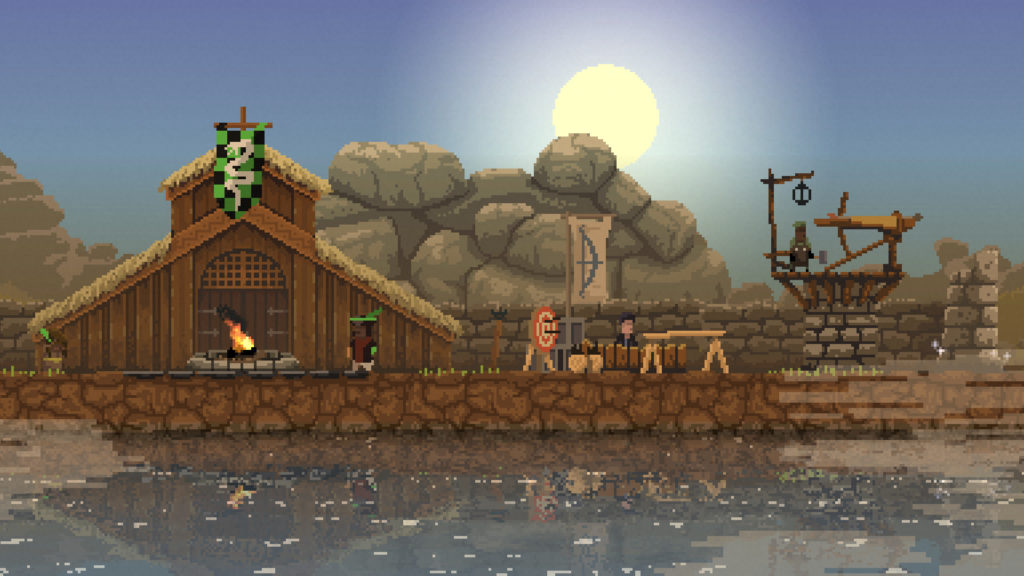 Another addition is the Banker. Once you’ve built up your castle enough you’ll see the Banker walking back and forth in front of the building. If you give him 10 coins, he will store them inside the castle for you and you will start earning interest. You can give him fewer coins and he will give you a few of them each day until he runs out. There doesn’t seem to be a limit as to how much can be stored in the castle, which is great. More money, more interest! I often find myself using all that interest up building the boat.

As you can see I still have things to do in Kingdom New Lands. There are two map fragments for me to find so I can unlock the last items on the fourth island. I’ve spent 50 hours with various queens and kings since the game launched on August 9th and until I get those everything else is on hold. For more information on this award-winning indie game, be sure to check out their official website.

*This review was originally posted on The Daily Crate.