When I found out that there was a remake for Odin Sphere coming out, I was overjoyed. I missed out on the original when it came out in 2007. So when Atlus announced Odin Sphere Leifthrasir, I ran out and plopped down enough to secure myself the Storybook edition. And I am so very glad that I did.

Maybe it was a blessing that the first time I got to experience your well-woven story was almost a decade later. Your vibrant world, bright and colourful, had me from the moment I walked into the attic and picked up Socrates. Maybe it was my ravenous love of books; Alice’s enthusiasm to read each book as they appeared reminded me of the nights I would lay on my bedroom floor well past my bedtime reading with the crack of light coming through my slightly open door. Ahh, the memories. 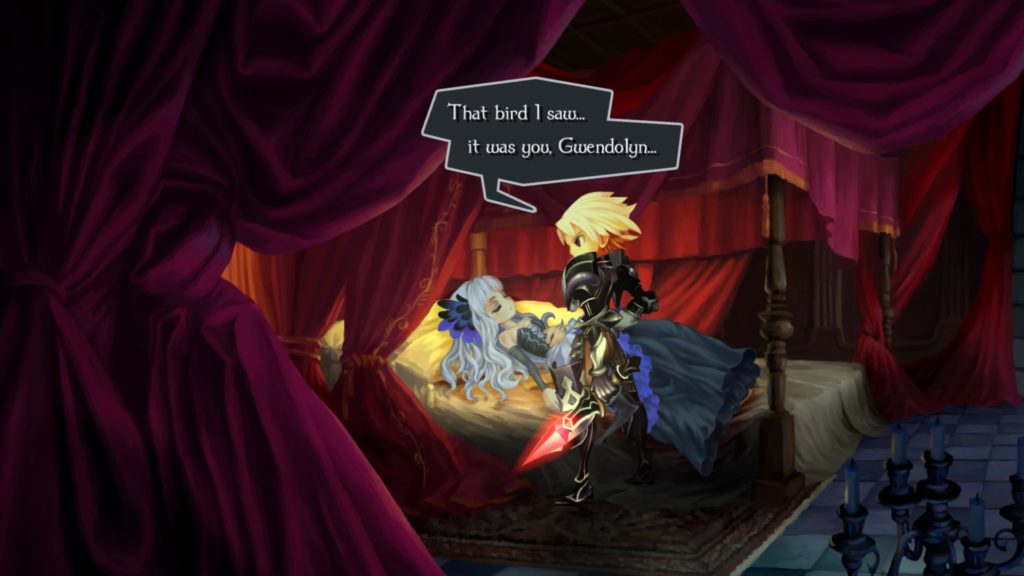 For those of you unfamiliar with Odin Sphere, it is the story of Erion, a world on the brink of destruction with heroes trying to thwart a future foretold. You play through the books of five characters, with paths crossing at various points in the storyline. Each of these books focuses on a single character, beginning with Gwendolyn, Valkyrie and daughter of King Odin. As you play through Velvet, Mercedes, Cornelius, and Oswald’s tales, the entire tale unfolds and you see everything come to a head. After completing the first five books, it’s time to delve into the various ways Odin Sphere’s story can end.

Odin Sphere Leifthrasir is a 2D action RPG with increasingly larger area maps to explore. Several of these areas contain enemies which must be cleared before you can progress, some with mini-bosses, leading up to a chapter ending boss. One of the unique aspects of Odin Sphere is the way each battle stage is circular, meaning there are no walls to get stuck against when you’re facing an onslaught. 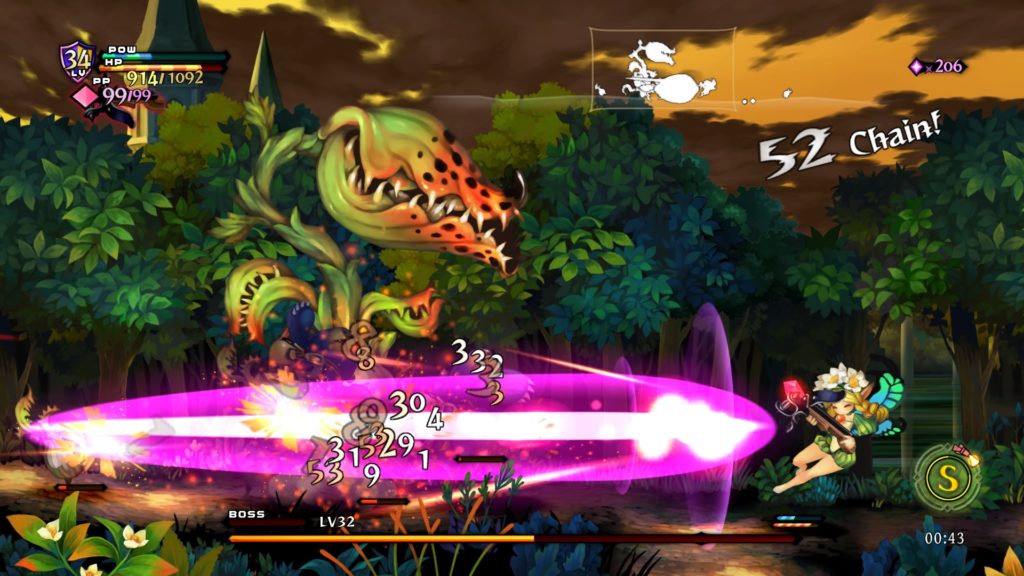 Fighting in Odin Sphere Leifthrasir is a combination of weapon attacks and special skills. Each character possesses a unique weapon known as a Psypher, special crystals created in the Underworld from expired life forces (called phozons). You can button mash your basic attack in combination with directional input to attack ground and airborne attackers, but the real power comes with using your special moves and chaining attacks. These active and passive skills are learned by locating Prisms, some which are automatically given from clearing an area while others are in hidden rooms. Skills and attacks can be buffered with various area of effect potions, such as fire, wind, and poison bottles that definitely come in handy during a boss fight.

Alchemy and cooking are other important aspects of the game. Let’s start with alchemy. By mixing items with potion bottles, you can create potions that heal, hurt, and enhance. Some potions such as Cyclone and Blaze can also open up new pathways, so be on the look out for suspicious looking walls. Keep an ear open for squeaks in the floor as you run through each area as root vegetables are the backbone of alchemy in this game. 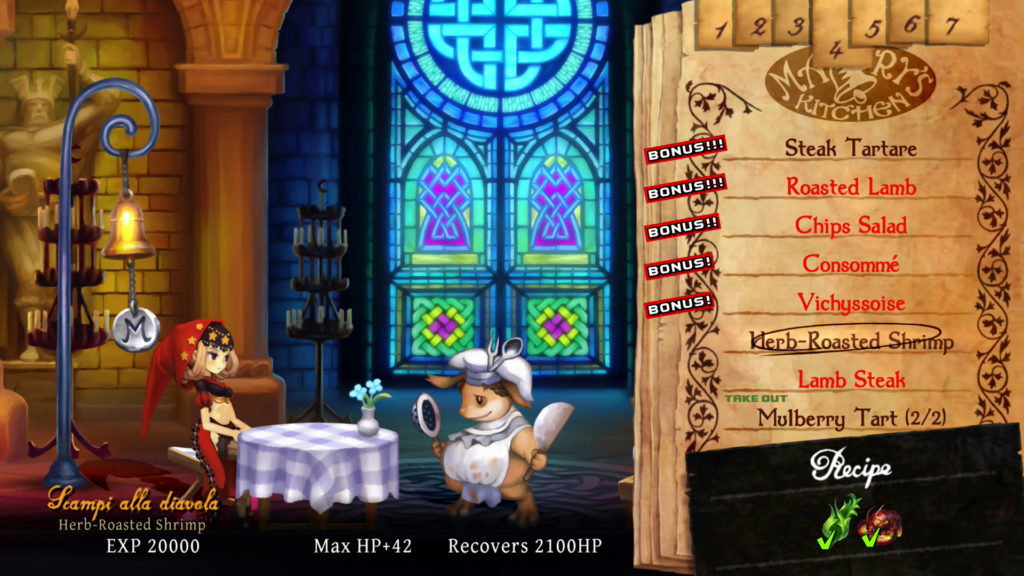 Scattered about Erion are a wide variety of recipes that you can present to Maury, the traveling pooka chef. Just hand over the required ingredients and you can have Maury make delicious food for you. Ordering from Maury gives you experience, increases your HP, and recovers any HP that you may have lost. This is the best way to level up your characters and earn points to unlock Abilities. The first three times you enjoy a dish will give you small decreasing EXP bonuses. 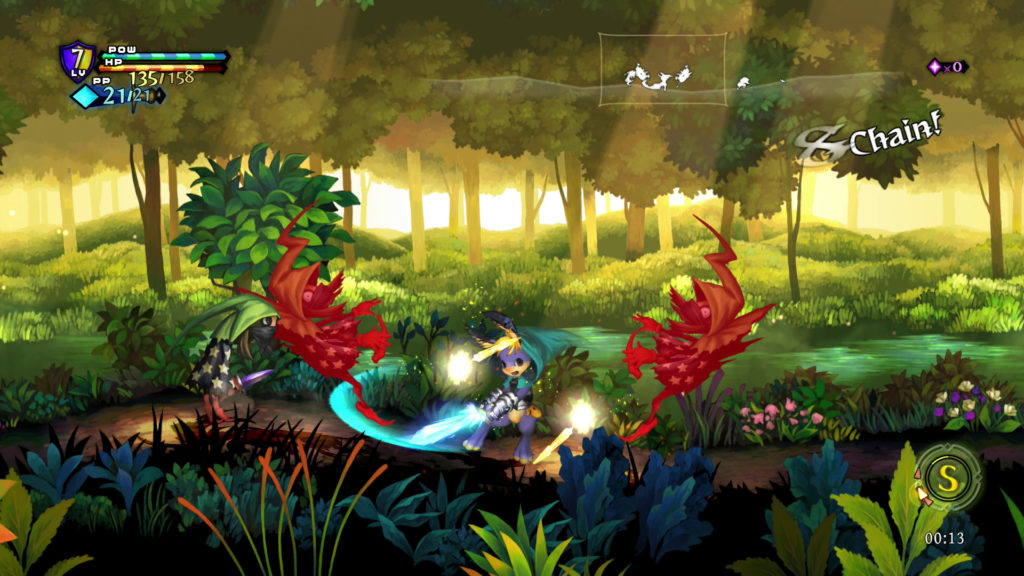 Odin Sphere Leifthrasir has several endings but only one “true” ending. However, you must experience every possible outcome and finish Book 6 by fighting each boss with the hero as foretold in the prophecy. I’m just about to finish up with the alternate endings so that I can watch the true ending scene. This will get me my second ever Platinum Trophy. Since I’m not one to trophy hunt, I think that should just go to show how much I am enjoying Erion’s story.

If you love quality Japanese games as much as I do, Odin Sphere Leifthrasir is a 20-25 hour adventure available right now for the Playstation 4 and PS Vita. I love the writing, I love the graphics… Hell, I just love this game and I think that everyone should take it for a spin.