With the Vault-Tec Workshop’s recent release, we’re nearing the end of Fallout 4’s adventure. I knew it wouldn’t last forever, that eventually I would complete absolutely everything there was for me to experience in the Commonwealth. But it’s not time to say goodbye just yet, especially not when I have all sorts of new things I can build.

Tune your Pipboy to the Vault 88 broadcast to start the quest which unlocks vault building. When you arrive, odds are the main vault door is under attack by raiders, should you enter this way. There are two other points of entry, but the quarry entrance was how I approached. After dispatching them, the Overseer grants you access and asks you to run a couple of errands before sending you to activate the remaining workshop benches in other areas of the large vault caverns. Be warned! Removing some of the larger walls of rubble or limestone will most likely reveal deathclaws and irradiated enemies that will require fire power. Make sure you venture down those tunnels prepared. 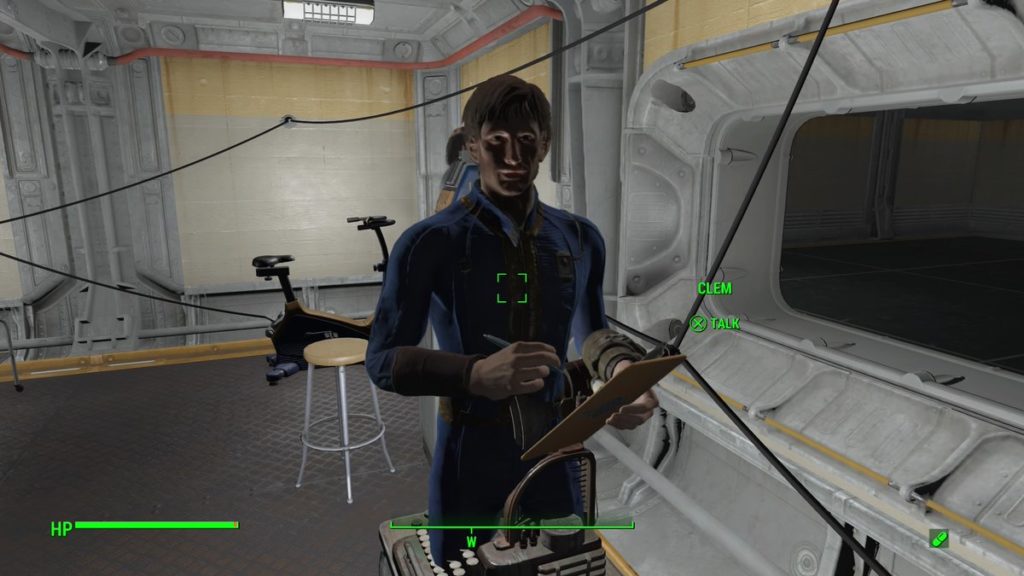 While you are spelunking, the Overseer’s waiting for some recruits to answer the vault beacon. Whenever you choose, you can help her screen the three potential vault dwellers to see which best fits her plans for testing the various prototypes she’s blueprinted over the years. The affable and incredibly naive Clem is the man for the job, and the next bit of “questing” requires you build her machines and decide how to torture the poor boy. But this is a Fallout game, so you can always take the nice guy route instead. With the exception of the mistake I made with the first machine, I chose to make my remaining prototypes boring Happiness producers for the Vault and my other settlements. 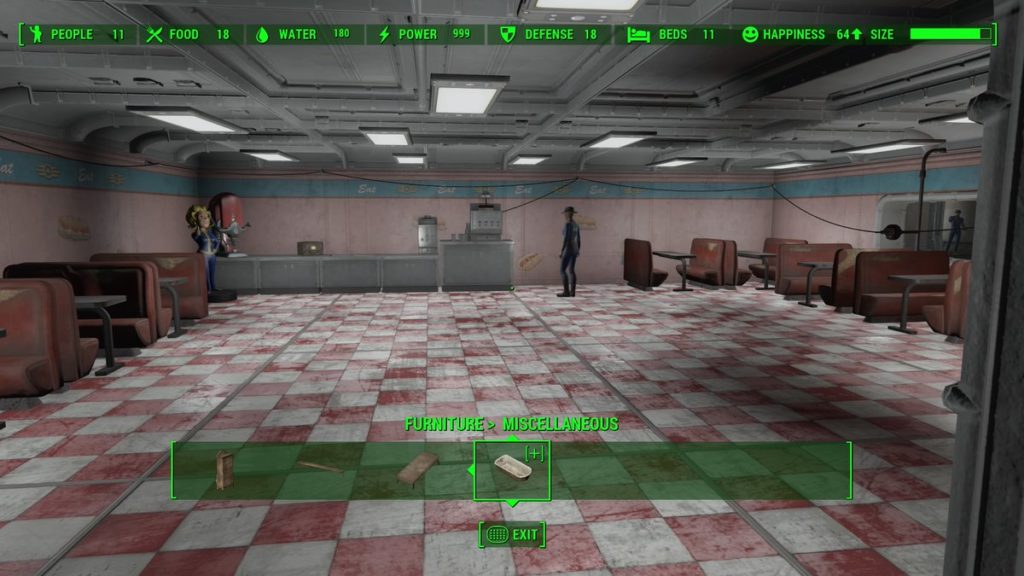 I did a little bit of building in the beginning, making a utility room for the Overseer’s prototypes. Once I finished up with all of that, it was time to roll up my sleeves and build to my heart’s content. I started with some living quarters and nursery rooms, then built a room to fit my closest reactor. After that it was another utility room that I would use as an indoor garden before creating my cafeteria. Even with supply lines from several of my settlements, I ran out of steel and have been buying up as much as I can to finish creating the main building and string power throughout. Right now it’s a three story maze in the main area with guard stations all around my perimeter. 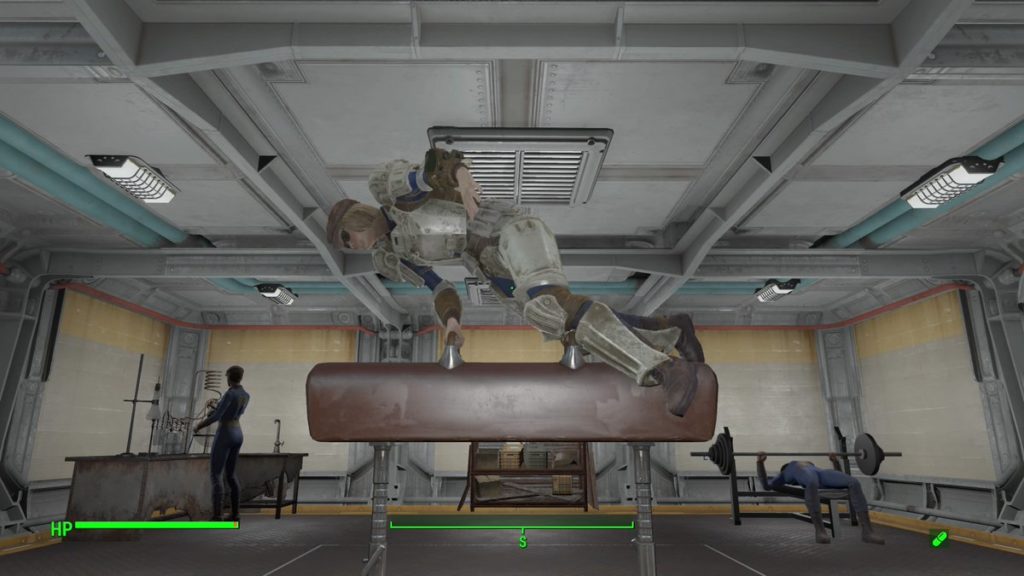 Some of the cool stuff you get with the Vault-Tec Workshop to boost morale at all settlements include the pommel horse and weight bench (above). You can find these in Furniture > Misc. I’ve been running around to my settlements adding both of these when I swing by to help put down Super Mutant and Raider attacks. Both of these, as well as the prototype machines, will grant you a temporary skill boost based on each one (slot machine=luck, weights=strength, etc). There’s also new Vault posters, counters, and lots of undamaged furniture to play with. One thing I wish was here was a better shop system for inside the vault. So far I’ve have to build a larger atrium to accommodate my six shops and it feels kind of clunky. It would have been nice to create shop counters like most every other operational vault offers. 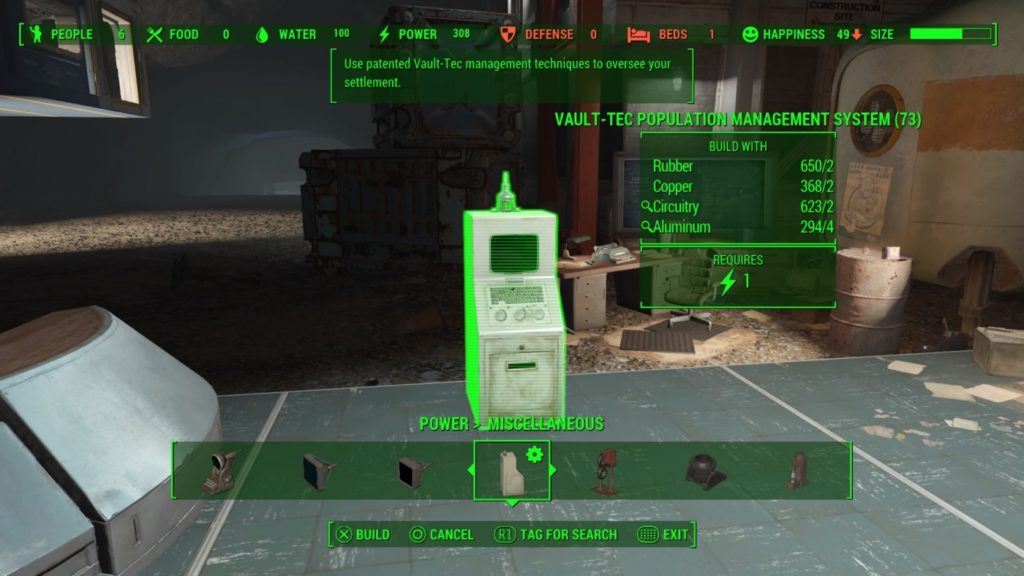 But the piece de resistance is the Population Management System. Tucked away under Power > Misc, a few options down from your settlement beacon, this beauty tracks your settlers, lets you see who needs a task and assign one if available, can control any turrets connected to it via power cables, and will show you where in the Commonwealth your companions are. I’m hoping I can locate Strong this time around as he apparently got “lost” when I asked him to go to Sanctuary after I found him the first time and trips back to Trinity Tower have proven fruitless. Each settlement will need its own terminal, so I suggest starting with the ones more heavily populated.

With all sorts of new and cleaner options available, I know I’ll be spending far too many hours between now and Nuka-World updating and rebuilding older settlements to make my people happier. And it doesn’t hurt to make sure they can handle an attack or two on their own if I’m needed at three settlements at the same time. Vaults for everyone!