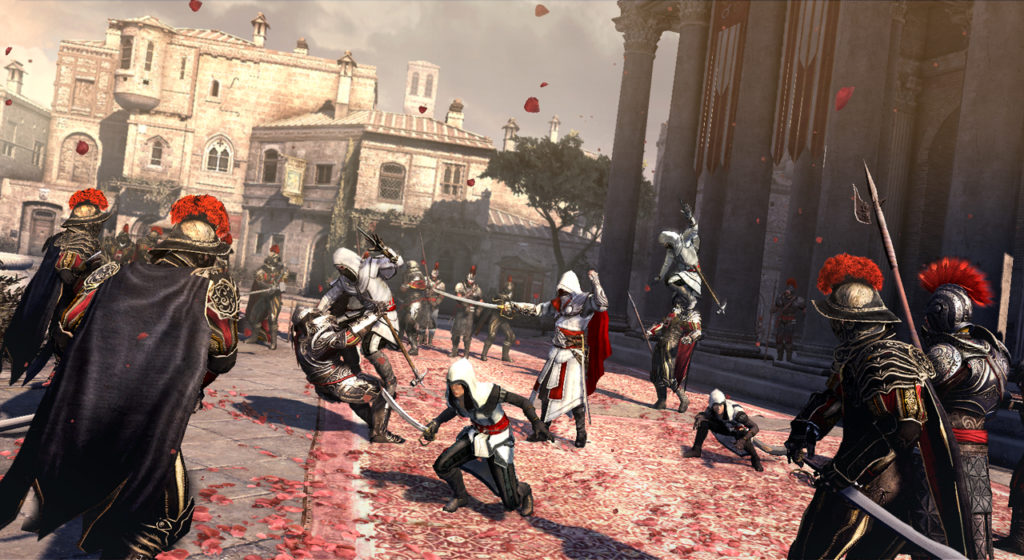 There are few games that cause me to scream obscenities at my television on a regular basis that I still find enjoyable and push through to complete. The Assassin’s Creed franchise currently ranks number one in that category, with Brotherhood feeling more like an extension of AC2 than being a real “third” installment.

My husband gets stressed watching me play any of the Assassin’s Creed games and threatens to take the controller away from me all the time. He’s even said he thinks about buying noise canceling headphones he can wear whenever I am playing beside him on the couch so he doesn’t have to listen to me yell at Ezio/Desmond every time he fails to make a jump I’ve made several times before. In the past, when I’ve had moments of rage that have brought me within an inch of throwing my controller at the wall, he’s stepped in to help me get past whatever it was that was giving me white hairs. This time there was no passing of the torch. Amidst all the swearing, shouting, frustrated grunts and “I hate you”s, I searched every lair, climbed every building, and completed every sequence by myself.

Brotherhood picks up right where we left off in AC2. Desmond, Lucy and the gang find refuge from the Templars in the ruins of Monterrigioni, set up the mobile Animus, and send Desmond back in to find out more about the temples Minerva spoke of and the whereabouts of the Apple of Eden. After an attack on the assassin headquarters by Cesare, Ezio finds himself back in Rome, hunting down the Apple and trying to undo the damage the Borgia continue to inflict on the people of Rome.

Where AC2 was a nice leap forward in terms of game mechanics, Brotherhood didn’t seem to have much of any improvement. On plenty of occasions, Ezio would fail to grab a ledge I had grasped multiple times before, the static camera angles would make some jumps or climbs difficult to pull off (with Ezio constantly trying to fall off hanging platforms instead of jumping as I directed him to), and attempting to climb walls I would bump with an elbow during the middle of a timed chase. 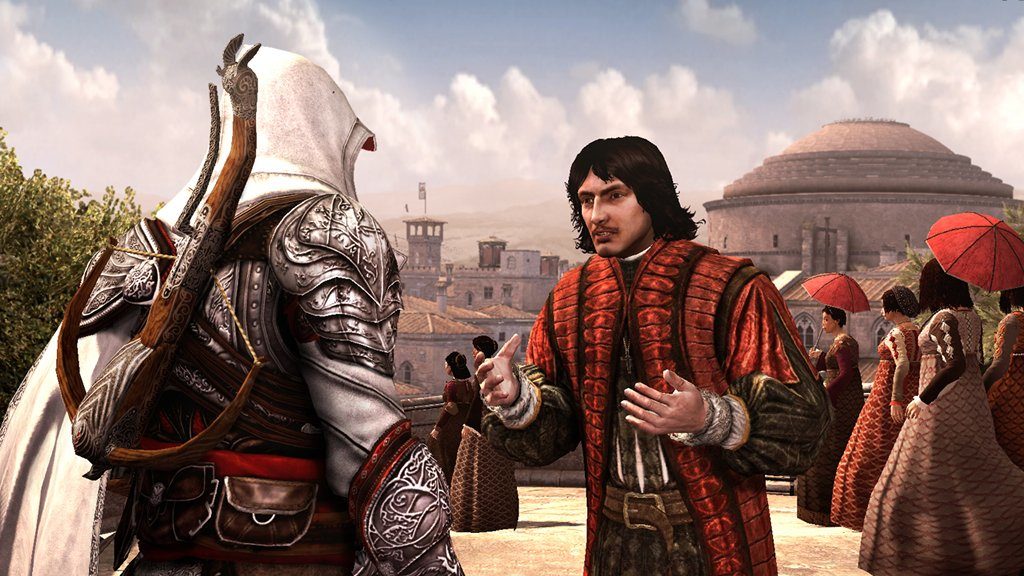 And at this point in gaming, how is it that Ezio cannot climb a tree? Seriously. He can scale the tallest and most awkward buildings in Rome (the Colosseum, for instance) but hiding in a tree to use the leaves as cover and execute an air assassination is the only trick not up his sleeve. I guess the hidden blade and hand cannon take up too much room.

A nice addition was being able to recruit assassins into the guild, sending them out on missions to gain experience and gathering items you can use towards completing shop quests. Having trained assistants at the ready to join in a tough fight or kill your enemies without them knowing you were up to it was also a great help, especially when I was sneaking around the Vatican. Using these recruits in my linked Project Legacy game via Facebook netted more unique items, including the Auditore cape with all its handiness at making sure I would never be notorious (situation willing) again.

The formula of Assassin’s Creed games also remains pretty unchanged. Start your Sequence, do a few assignments, scope out a hidden dungeon, climb the rooftops in search of treasure, then work through the three or four step main mission. Sure, we get a couple new things, like finding and destroying Leonardo’s War Machines (I never, ever, ever want to see that damn bomber again, thank you very much!) and the ability to purchase “outposts” for our various guilds. Three (or 2.5, depending on how you look at Brotherhood) games in I was hoping we might have seen a less predictable pattern.

While I did enjoy Brotherhood, despite my issues with Ezio’s climbing abilities, I can’t say it was my favourite of the three games. Part of me wonders if the game was thrown together in a planning meeting because they wanted to make a multiplayer game and threw in the single player as an excuse to charge full price at retailers. I haven’t gotten into that side of the game yet, partly due to the fact that I hate it when multiplayer is shoved into what I’ve thought were great single player gaming experiences, and because the group of people I will play online with have been busy and unavailable to play when I am. I won’t completely knock something I haven’t tried, but I’m just not pumped about multiplayer kill-fests like I am expect is all this mode is really about. 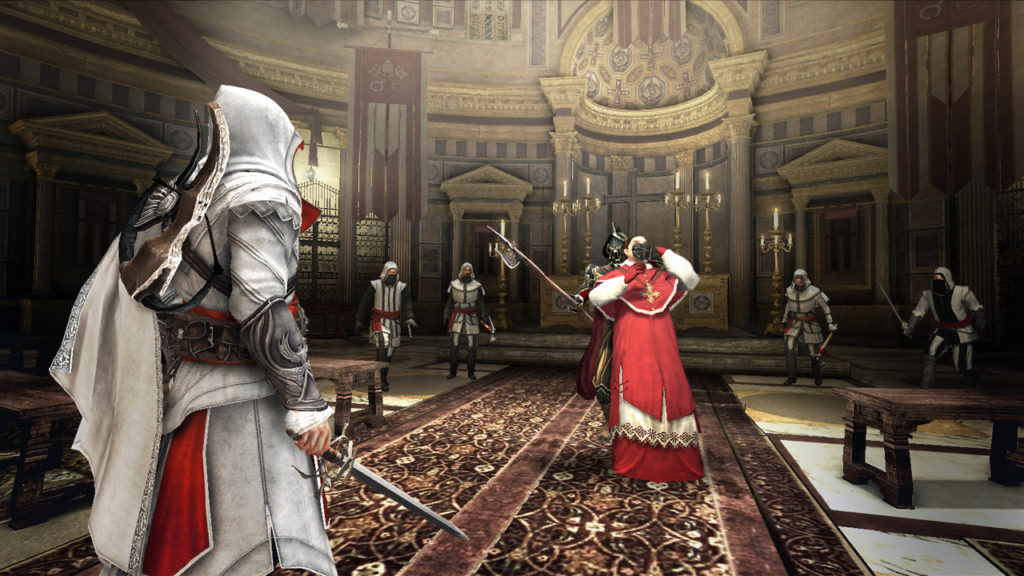 Brotherhood did add to the Assassin’s Creed experience enough to make it worth the hours I sank into the game, but it could have been better. On one hand, it felt as though Ubi was just trying to get a little more milk out of the franchise before the “trilogy” concludes. But there were some very entertaining moments in AC:B that almost made up for it. I am still upset that Ezio/Desmond has issues with bumping into walls and lacks certain common sense abilities. The whole Followers of Romulus side story seemed contrived and thrown in to give a meaning to those hidden dungeons, and I am still on the fence with tossing multiplayer into the mix. I’ll just have to wait and see what AC3 brings to the table before I can completely decide if we really needed Brotherhood or not.