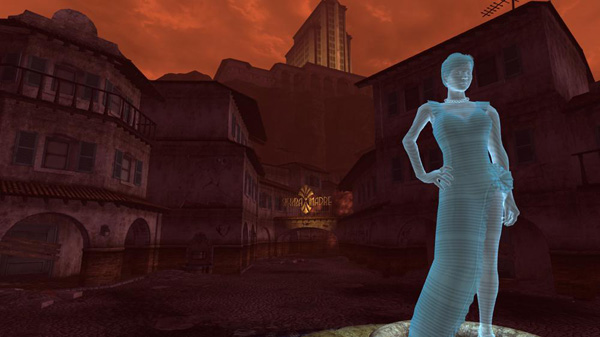 Of the two bits of Fallout New Vegas DLC I have played so far, Dead Money had to be the dullest and most pointless of them both. Hell, I wouldn’t doubt if it ends up as my least favourite of all the DLC for this game. Set in a closed area which can only be accessed one time via a Brotherhood of Steel bunker, you follow the signal of an old broadcast offering the time of your life at the new Sierra Madre Casino. Turns out that the radio broadcast was just a trap to lure adventurers so as to do the dirty work for a crazy old kook called Father Elijah.

After being KO-ed in the bunker thanks to some surprise gas, you wake up with a bomb collar strapped to your neck and find yourself the newest recruit in Father Elijah’s master plan to break into the Sierra Madre Casino. You’ll have to hook up with three other prisoners (Christine, the muted Brotherhood woman, DOG/GOD, a dog with a split personality, and the famous Dean Domino) in order to perform your task and deal with the holographic security men keeping an eye on the place as you plan the biggest heist of your career.

The town surrounding Sierra Madre wasn’t always populated by holographic security and undead murderers. Once it housed the people building the place for it’s eccentric owner, so you’ll be able to explore the old quarters for better gear and unique items. The gun Father Elijah gives you after stripping you of all your personal items doesn’t do much damage, especially should you find yourself no longer dealing with holo-officers. The “men” walking the streets can be incapacitated with bullets, but you’ll need DOG by your side if you want to disable them permanently. I did love how the town was littered with vending machines offering you the basics: food, stimpaks, cigarettes. You could even collect cigarettes throughout the area and turn them in for Sierra Madre chips (the form of payment accepted in this section of the game). And if you come across the right notes laying around town, you can unlock some weapon upgrades and ammunition.

Try as the story might, it just never really grabs me as much as I want it to. There is a story in there, of love, addiction, and greed. But it’s so weakly presented that playing Dead Money was too much of a chore. At no point did I ever feel I was having fun with this chunk of additional story, only that I wanted it to be over as soon as possible. Not being able to go back and really clean out the safe was a bit of a downer, too.

Dead Money is definitely not worth the full DLC price tag, and if you play it as part of the content on the Ultimate Edition, then get this one out of the way earlier on. Aside from finding some pretty nice loot in the safe, the only other perk that benefited me from purchasing this was the +5 boost to my level cap.