Ancient prophesies have begun to come true in the land of Berge. The forces of Creation and Destruction are battling against each other for the power to change the fate of the world. Someone is destroying ancient Monoliths keeping Delgaia, God of Destruction, sealed off from Berge, and it is up to you to gather Force and influence the outcome of this battle.

Hexyz Force provides you two main characters to play through the story with: Cecilia Armaclite and Levant von Schweitzer. Both characters are Hexyz, re-incarnations of divinities from the dawn of Berge’s beginnings, and each have their own unique story leading them on a quest to tip the scales of Berge’s fate. Atlus truly provides a 2-in-1 roleplaying experience with this amazingly fun and humourous title.

And while Cecilia and Levant each have a unique story, they are not completely separate of each other. At several points throughout their journeys, the two Pillars will meet as they share a similar goal. One story told by the actions of two heroes. Both sides with vibrant, lovable and friends and family fighting for their futures.

My first playthrough was with the lazy and slightly ignorant Cecilia, a cleric in the Temple of Palfina who’d rather spend her time staring up at the sky than studying. Her destiny confronts her one afternoon when a thick miasma descends on the Temple, bringing with it monsters and a mysterious evil creature leading them. Suddenly, she is enveloped in a magnificent white light and transported to the Holy Vessel, the source of Force, and informed that she is a Hexyz – a reincarnation of the divine Palfina. She inherits the Staff of Palfina (Holy Riafalt) and is given the task of tipping the scales back towards that of Creation in order to save Berge.

Cecilia reluctantly sets out to gather Force from the Monoliths that keep Berge’s enemy sealed away, with her furry friend Ralu and another Hexyz, Raffi, as her companions. Along the way she will cross paths with races unknown on her side of Berge, meeting both friend and foe from both sides of the Black Precipice. 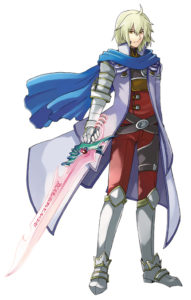 On the other side of Berge, someone kills the fiance of Levant’s ruler, destroying hope for peace with all races on Dark Berge. The death of his beloved suddenly changes Axel, and he commands his armies to purge the land of the Elves, Lycans and all others who seek to destroy him. Levant cannot understand what has happened to his friend, and when he assists those Axel accuses of killing his fiance, Levant is marked and sentenced to death for treason.

Spirited away from the dungeons by Irene, half-sister to Axel whom Levant swore to protect, and a Lycan named Greik, Levant seeks out the truth of what happened that night in the Elven Forest. For he is one of the Pillars, wielder of a holy Ragnafact hidden and protected by the Elves for centuries.

One of the key components of this game is the use of Force. Force is the energy of Berge, both Creative and Destructive, that flows naturally throughout the world. The Hexyz can utilize this power to search for hidden items, strengthen weapons, open doors and create walkways using Force Scan. Force is gained along with Experience Points at the end of each battle.

The Hexyz characters also wield special weapons bestowed upon them by the divinities they embody. These weapons, Ragnafacts, can be strengthened by infusing them with Force, enhancing three developmental properties. Each Ragnafact can learn a wide variety of combat, healing, and support actions. These are automatically designated as you infuse more and more Force into them. Of course, the tougher the enemies you fight, the more Force you will obtain. At times, not all characters in your party will have Ragnafacts, either because you haven’t located them yet or that particular character cannot wield them.

Additional weapons and accessories are created by combining various materials, sometimes with a dash of Force for good measure. These materials are collected by enemy drops after battles, looting chests and finding Harvest spots. From the Fusion option in the menu, you can create Forcefacts (disposable weapons with limited durability), accessories to protect your characters from head to toe, and special materials used for making stronger items.

Hexyz Force utilizes a turn based battle system, featuring Force Burst as a special technique for the Hexyz you control. When equipped with a Ragnafact that has a strong bond with your Hexyz these Force Burst abilities are accessible. In order to use them, the Burst Gauge must have reached the minimum level required, ranging from Level 1 to 3 (the max), which slowly fills as you attack or take damage in battle.

Upon completing each Phase (aka-Chapter) of the game, Creation and Destruction points will flow into the scales of the Holy Vessel. Your actions during each Phase are tallied up and will add to the weight on both sides of the scale. Completing side quests and selecting the correct dialogue responses during conversations are a part of the scoring. General rule of thumb – the first response leans to Destruction, the middle for neutral, and the last response adds points to Creation.

Hexyz Force features several fully voiced over anime cut scenes, as well as an intriguing story filled with informative and entertaining dialogue. Everyone knows that a good roleplaying game needs a solid storyline and engaging characters, which Hexyz Force truly brings to the table. They also did an amazing job ensuring that both stories meld together harmoniously, with no discrepancies between the two that I have encountered thus far. I find myself so easily lost in the story that my PSP battery dies often. There hasn’t been a PSP title that has had that affect on me in a while, and it was an absolute delight to spend so much time with a fresh roleplaying game.

This is definitely a game hardcore JRPG gamers will want to invest the time and money into, as well as gamers looking for a great new RPG title for the PSP library. With two stories to play through and several sidequests and areas to explore for rare items, you are easily getting at least 50 hours of game time out of Hexyz Force. Aside from the usual repetitive battle cries from the characters, the overall voice cast is pretty decent. However there are a few characters who are a bit too over the top for me. There almost always seems to be one or two of those in dubbed games. If space had allowed, I would have liked seeing the Japanese audio track with subtitles as an option, but this is a PSP title, so space is limited. For $30 US you can’t go wrong with putting Hexyz Force beside Lunar and Persona on your PSP game shelf.

Review product (code) was provided by Atlus and does not affect the outcome of this review.