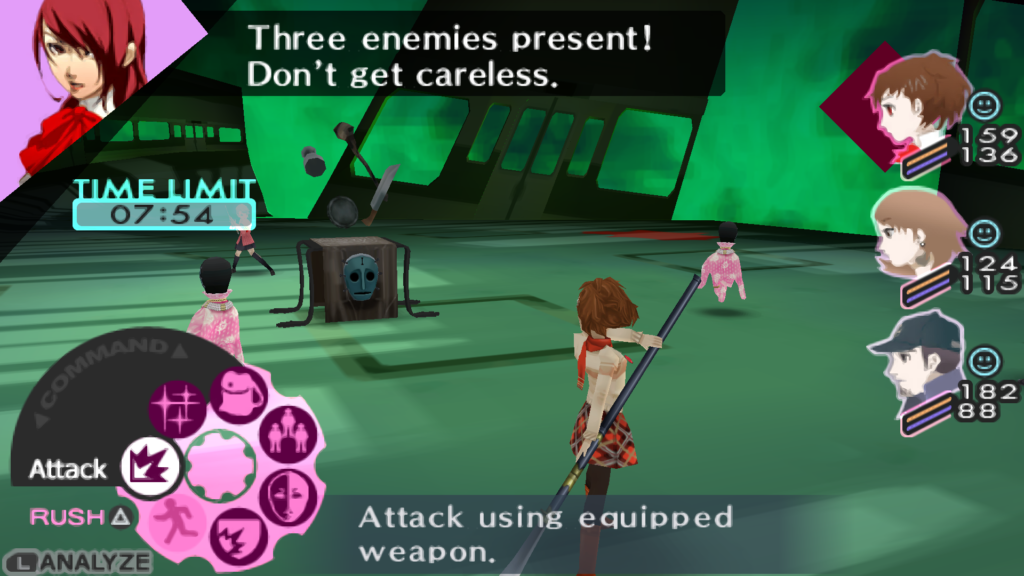 By far one of the most-loved JRPGs of the Playstation 2 era, Persona 3 Portable (or P3P) gives us the opportunity to re-visit the Dark Hour and discover the various Personas that our mind is able to call upon in the fight against the Shadows.

By day, you are a typical high school junior. You go to class, make friends, participate in school clubs and work part time for some extra spending money. By night, you and your dorm-mates enter into a time known as the Dark Hour where you battle your way up the looming tower Tartarus in hopes that you can right wrongs belonging to those who came before you. The story of Persona 3 still holds up as one of the best and most enjoyable titles I have had the pleasure of wasting away my time with the JRPG category over the past few years.

P3P strikes a wonderful balance between grinding in the randomly generated levels of the Tartarus dungeon and enhancing your Persona-wielding life-style with extra-curricular activities. Exploring Tartarus and defeating the Shadows lurking around each and every corner brings you closer to ending the Dark Hour for good. Making friends and creating strong bonds with them is what brings additional power to the Persona you create to assist you in your quest.

Unlocking Personas is like catching Pokemon. Once you start, you just can’t stop! When you first enter Tartarus you’ll only have the inherent Orpheus available. As you defeat Shadows you’ll be able to hold more Personas acquired by obtaining special tarot cards. The further you climb to the top of Tartarus, the more powerful the cards you can find. Visiting the Velvet Room, a mainstay of the Persona franchise, you’ll want to fuse as many new Personas as possible, with some instances requiring up to six Persona cards in a fusion.

Featured in this new handheld version of the game, P3P now allows you to chose between a male or female main character. Social Links with classmates and other residents around Port Island will differ depending on which you choose. While the overall story is the same, it’s the little things that impact you will remember your high school days.

This being my second time through the story of the SEES group, I chose to experience life at Gekkoukan High School as a female student. Choosing the female option, your cursor and other icons are a soft shade of pink as opposed to the blue for the male option. I joined several clubs, including the volleyball team and student council, making a lot of wonderful female friends. I also spent time after school hanging out with fellow SEES members Junpei and Akihiko in an attempt to get closer to them. With the female character, you can also choose if Igor’s assistant in the Velvet Room is the beloved Elizabeth or the new male option, Theodore.

The one aspect of playing with the female character that I was most interested in exploring was seeing if it was possible for her to date the guys around her much as the male character could in the original. I spent nights slaving at Chagall Cafe either working or just having the Pheromone Coffee so that I could increase my Charm to a level that would allow me to build my Social Link with the dreamy and sought-after Akihiko-senpai. Sadly, there was no smooching or hand holding to be had. Once I had maxed out the Social Link, Akihiko was not to be found in his usual spot Monday and Friday afternoons in the Lab Hallway. I was unable to find any information to see if I had done anything incorrectly, which means my poor high school crush on Akihiko will forever remain just a crush.

Atlus has also included the part-time job option which allows you to earn some money while increasing your Academic, Charm and Courage skills. Before you could only enhance these skills by studying, correctly answering questions during class and spending money at certain establishments. While you can still simply spend some money and do so, working at a shop helps boost two of these areas at a time as well as pocketing some money to help by that fancy new weapon you’ve got your eye on.

My favourite new additions to P3P are the outrageous outfits to stuff into my wardrobe. It’s an added bonus that your characters really do wear these in Tartarus. My favourite was the Battle Panties, a white bra and panty set with matching knee-high stockings giving the wearer a plus two stat bump to their Magic skills. Santa suits, bathing suits and maid outfits are other special apparel you can collect.

Other tweaks to P3P include bringing two new difficulty modes, meaning you now have five degrees of difficulty at your fingertips, as well as the much desired battle command control as was offered in Persona 4. Using the Tactics option from your in-battle menu, you can now set parameters for those members currently part of your team. This option can only be accessed when you are controlling the main character and gives you a much better handle on those tough bosses.

P3P is not a perfect port of the original PS2 title. Due to the limitations of the PSP disc, the anime cut-scenes have been replaced with game graphic voiced over scenarios. I do miss them, but it is a small sacrifice to make in order to have everything else introduced to this version of P3. Also excluded from P3P is the additional content The Answer which was released with Persona 3: FES.

Since P3P arrived at my doorstep I have done nothing aside from spend all day on my PSP. Even in my sleep, I am thinking of what extra-curricular activities I want to do over the next school week, figure out how many floors in Tartarus I want to climb and which types of Personas I need to create so that I can get the best of the best for the inevitable final battle. Looking for something to waste countless of hours on? Then this is your game, as you can grind and grind to your heart’s content. There is so much content on this disc that it’s about to burst at the seams. Do yourself a favour and buy this game now. Buy it for a friend, too. Share the love of the twisted darkness that is Persona with as many people as you can.